AFTER over three weeks of closure, Pulau Mutiara wholesale market in Gat Lebuh Macallum is back in operation with every trader and worker vaccinated.

The looks of relief were evident on the traders as the barriers to the market were removed.

Vegetable seller Lim Choon Huat, 40, said yesterday he felt happy that he could reopen his wholesale shop at the market after Penang Island City Council (MBPP) announced it on Sunday.

“When the market was closed, I couldn’t do anything and my workers, who are paid daily, could not earn any income,” he said.

Lim, who has been selling vegetables at the market for the past 10 years, said the decision by MBPP was a timely move and the public should not worry about going back to the market for essentials as the place had been sanitised.

He said all the traders and workers were fully vaccinated and could now carry on with the trading of fruits and vegetables with confidence.

“To be frank, I feel safer here than outside because I know that everyone of us has been vaccinated and the place has been fully sanitised,” he said with a smile.

Another trader Chuah Hock Eng, 47, who runs a grocery store in the market with his wife Loh Goik Lee, 47, agreed with Lim.

But Chuah bemoaned the goods that had spoiled during the time he was not allowed in.

Chuah, who has been in the business for 17 years, said he foresaw that business at the market would be slow for the first weeks as customers might still be reluctant to visit.

He hoped customers would be confident that the previous spread of infections had ended at the market.

The wholesale market was closed from July 3 after the state Health Department detected Covid-19 cases there and labelled the cluster stemming from the market as “Lintang Macallum Dua”.

On July 5, authorities reported that out of the 261 screenings done in this cluster, 64 cases were found, yielding a positivity rate of almost 25%.

While authorities did not provide a running tally of cases found in any cluster, this particular cluster was still named in Sunday’s daily update as having five new cases stemming from it.

Pengkalan Kota assemblyman Daniel Gooi said while the reopening was a relief for traders, he however felt that the market should still be closed as there were still positive cases in the area.

“My personal opinion, the market should not be open yet. But as Health Ministry has allowed it, I think it should be fine,” he said.

Gooi also urged traders and market-goers to always be mindful and comply with standard operating procedures.

“We don’t want the market to be closed twice,” he said.

Yesterday, MBPP announced that the Heath Ministry had allowed the wholesale market to resume business at 3.30pm.

The city council instructed its personnel to dismantle the 30 barricades and tape barriers.

There are 145 units in the wholesale market and over 30 stalls at the wet market next to it.

A total of 170 traders and their workers earlier underwent screening at the state government’s mass Covid-19 screening programme at City Stadium. 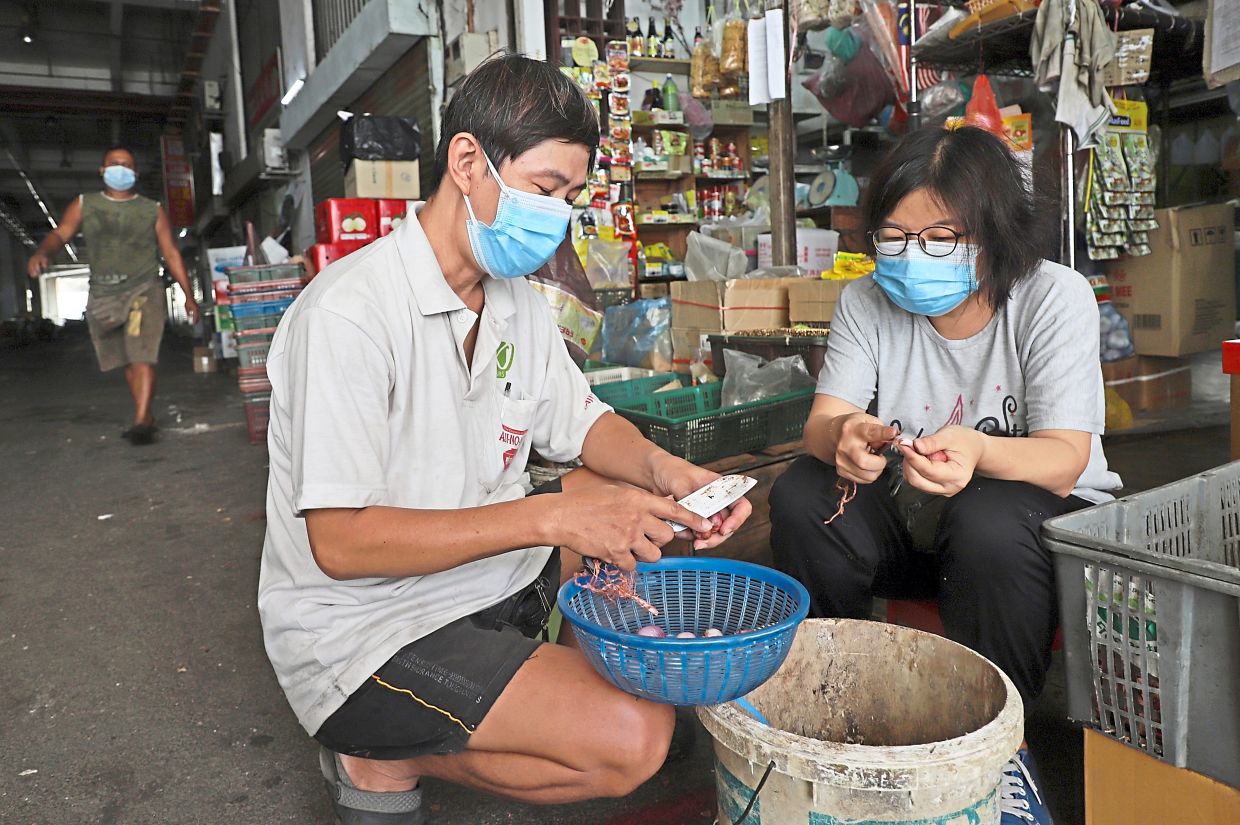 A market-goer getting help in scanning her temperature from a Rela member at the Pulau Mutiara wholesale market.

Workers uploading vegetables onto a lorry at the Pulau Mutiara wholesale market.

Lim: I feel safer here than outside because I know that everyone of us has been vaccinated and the place has been fully sanitised.

Chuah: We lost about RM1,000 worth of goods due to the closure.