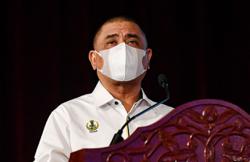 Yee (left) speaking to Keat Woon and Swee Jiuan at Tanjung Malim health clinic. With them is Muhammad Fairul (second from right).

A PAIR of elderly siblings from Seri Kembangan in Selangor found wandering in Tanjung Malim, Perak, have been placed at a temporary shelter.

“A trader from the area had told me about the pair mistaken as husband and wife.

“After talking to them, I learnt that they have been in Tanjung Malim since December last year,” he said.

Yee said Keat Woon had taken his sister on a trip to Tanjung Malim after withdrawing some money from his Employees Provident Fund (EPF) during the Christmas holidays.

“They rented a hotel room and stayed in Tanjung Malim.

“When the movement control order came into effect, they could not return to Seri Kembangan as they did not have permission to cross state borders,” he said.

“They stayed on, almost spending all of his EPF money to rent a room until June.

“As they could no longer afford the rent, they stayed in temporary accommodation at Tanjung Malim health clinic and also on the five-foot way for three days,” he added.

Yee said the siblings had relatives from their mother’s side in Seri Kembangan but lost contact with them.

“According to the siblings, they have been looking after each other for some time now,” he said.

“Muhammad Fairul made arrangements for the siblings to be sent to Anjung Singgah Ipoh, a temporary shelter for homeless folk in the city,” he said.