Residents waiting to receive the groceries at the hall. — Photo posted on Ramasamy’s Facebook page.

SOME 500 needy households in Taman Chai Leng and Taman Kimsar near Butterworth, Penang, received food baskets to ease their burden during the pandemic.

Ramasamy, who is also Prai assemblyman, said the food basket handover was the joint effort of his service centre and the Taman Chai Leng Multipurpose Hall management committee.

“The items were from various contributors besides me.”

He said that so far, 1,075 food baskets had been given out in the Prai constituency and more would be given in the days to come.

“Apart from Prai, we have also given out food baskets to recipients as far as Kuala Lumpur and Kedah on humanitarian grounds,” said Ramasamy.

Seberang Prai city councillor P. David Marshel called on the state government to consider giving some cash aid as well to the needy who cannot pay their rent.

“Now the big issue is the rental and they also need money to buy things like diapers and infant formula. It’s not enough to give only food baskets,” he said.

Retired factory worker Lionel Nathan, 62, who is single, said he was grateful for the food aid.

“I am jobless now and staying in a church in Taman Chai Leng,” he said.

He saw a banner near the church about the food basket presentation and so he went to get one.

She has a daughter aged 45 who settled down in Australia and Lee now lives alone.

She was happy when her friend told her about the food basket project.

Single mother A. Paramewari, 53, from Prai, said she did not have a job.

“The aid came at the right time for me and my daughter as the prices of things have gone up.”

He has two children staying with him and only one still has a job. Residents waiting to receive the groceries at the hall. — Photo posted on Ramasamy’s Facebook page.

Ramasamy (right) handing out a food basket at the hall. 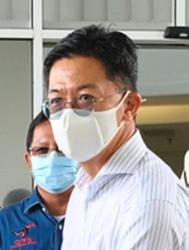