Fatimah (second from left) presenting food aid to a family in Sibu.

THE Sarawak Welfare Department has identified 225 families who will receive aid after they raised the white flag.

State Welfare, Community Wellbeing, Women, Family and Childhood Development Minister Datuk Seri Fatimah Abdullah, after presenting food aid to 50 families who had raised the white flag, said welfare officers throughout the state went down to the ground to obtain information.

“We took immediate action in all divisions to see how many of the people were affected by the lockdown.

“We took down their particulars and checked if they had received any aid or not,” she said.

The minister said some of them had received food aid from NGOs, individuals and the police through the latter’s Ops Bantu programme.

“We found that those who raised white flags were not locals but those from the rural-urban migration.

“Due to the movement control order, they had lost their jobs and could not afford to pay their house rent and buy food,” she said.

During a walkabout in Jalan Tiong Hua, Fatimah learned that a family from Bintangor was facing financial hardship as the breadwinner had lost his job as a labourer.

“His family of three children is renting a room for RM125 a month while the man’s sister rents another room.

“The man, who is a school dropout, could not find another job due to his limited education and skills,” she said.

She added that the Welfare Department extended an immediate aid of RM300.

Fatimah said a holistic approach was needed to overcome urban poverty as a result of rural-urban migration.

She called for the setting up of an inter-agency team involving the respective local councils as well as welfare and education departments to find a permanent solution.

She also urged the people to inform the Welfare Department if they knew of anyone who needed help. 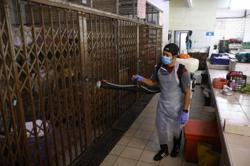