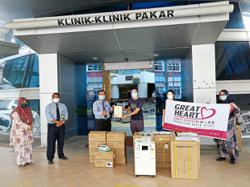 Former students of Sacred Heart School in Sibu, Sarawak, known as “Knights”, came to the aid of their alma mater by raising RM88,000.

Anthony Chan, who spearheaded the project for the school’s underprivileged students, said the amount far exceeded what he had expected.

Speaking at a mock cheque presentation ceremony, the class of 1993 member said although the initial target had been RM6,100, members the Old Students Association (Shosa) were confident more would be raised.

“They told me to go forward with courage and set a target of RM12,200 instead, assuring me that SH Knights would rally to the cause,” he added.

The donation drive was launched on July 12, with the association’s former president Dr Gregory Hii being the first to contribute.

To Chan’s surprise, the momentum kept growing and when the donation drive ended, former Shosa president Senator Robert Lau came forward to round up the figure to RM88,000.

A visibly moved Chan thanked all his seniors, peers and juniors who gave so generously towards the cause.

“I feel very proud to be among this league of extraordinary gentlemen who returned to the school to help current students,” he said.

School senior assistant and the fundraising drive’s co-chairman Lau Tiew Kiong said the funds would be distributed in four phases.

He said phase one was for a batch of 49 students while the second phase would benefit 75 pupils of Sacred Heart English Primary School.

“The third phase will be after school resumes, whereby funds will be extended to other underprivileged secondary school students.”

The final phase would be a “targeted assistance” exercise, where needy students would get aid in cash and kind, said Tiew Kiong.

Shosa president Yong King Sung said the Knights could always be counted upon to lend their alma mater a helping hand.

“Last October, the Knights chipped in more than RM120,000 to help upgrade the sound system in the school hall and two lecture halls.

“And now they have stepped up again, united in the fight against poverty.”

Yong added that while older former students responded well to this latest initiative, it was a great sense of relief to see that so many of the younger ones came forward too.

Senator Lau, who was present at the event, also helped family members of aid recipients to register for the Covid 19 vaccination. — By ANDY CHUA 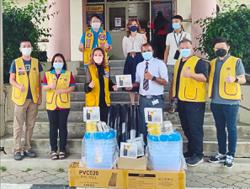