Rozali (white cap) and Soon (left) checking the condition of the Bukit DO Recreational Park in Bukit Mertajam.

DAMS and recreational areas under the jurisdiction of Penang Water Supply Corporation (PBAPP) will reopen to the public from today onwards.

The Ayer Itam Dam, Teluk Bahang Dam, Mengkuang Dam and Bukit Dumbar Recreational Park will be open for recreational activities from 7am until 7pm daily.

Other than Mengkuang Dam, where 350 persons are allowed at any one time, the maximum number of persons allowed at the other dams are 200 persons at one time.

PBAPP chief executive officer Datuk Jaseni Maidinsa said the reopening would be done with a series of safety rules and regulations for the public.

“All visitors must register with MySejahtera or through written registration when visiting and only individual recreational activities are allowed.

“No group activities are allowed and individuals must adhere to a three to five-metre physical distance,” he said during a visit to the Ayer Itam Dam yesterday.

State youth and sports committee chairman Soon Lip Chee said other parks like the City Park and the Botanical Gardens had reopened earlier on July 7.

“We hope people will avoid misusing this privilege to hold small social gatherings while they carry out their exercises.

“We hope those who are unwell will stay home and not force themselves to be out for exercises.

“We hope to remind the public to be aware of their health and limits.

“Do not overexert yourselves and start rigorous exercises right away. Take time to build your stamina again as we have all been staying in for some time,” he said.

In Seberang Prai, 15 public parks have reopened since the state entered Phase Two of the National Recovery Plan (NRP) on July 7.

“Although the parks are open now, the open gymnasiums remain closed to prevent contact risk among the visitors,” he said.

Of the 15 parks, two are in north Seberang Prai, 11 in central and two in the south.

Earlier, Rozali visited the Bukit DO Recreational Park in Bukit Mertajam with Soon to inspect the condition of the public park.

Soon said he had asked MBSP personnel to clean the park, especially the steps which had grown mossy during the closure.

“As many parks were closed since June 1, they need upkeeping and I have asked the MBSP to see what they can do about slippery staircase and walkways,” he said.

Meanwhile, Jaseni shared that the water levels at the dams in the state were at a healthy capacity compared to that of last year.

“Now, even in July at the end of the dry season, we are doing okay as the water levels in the three dams are healthy. 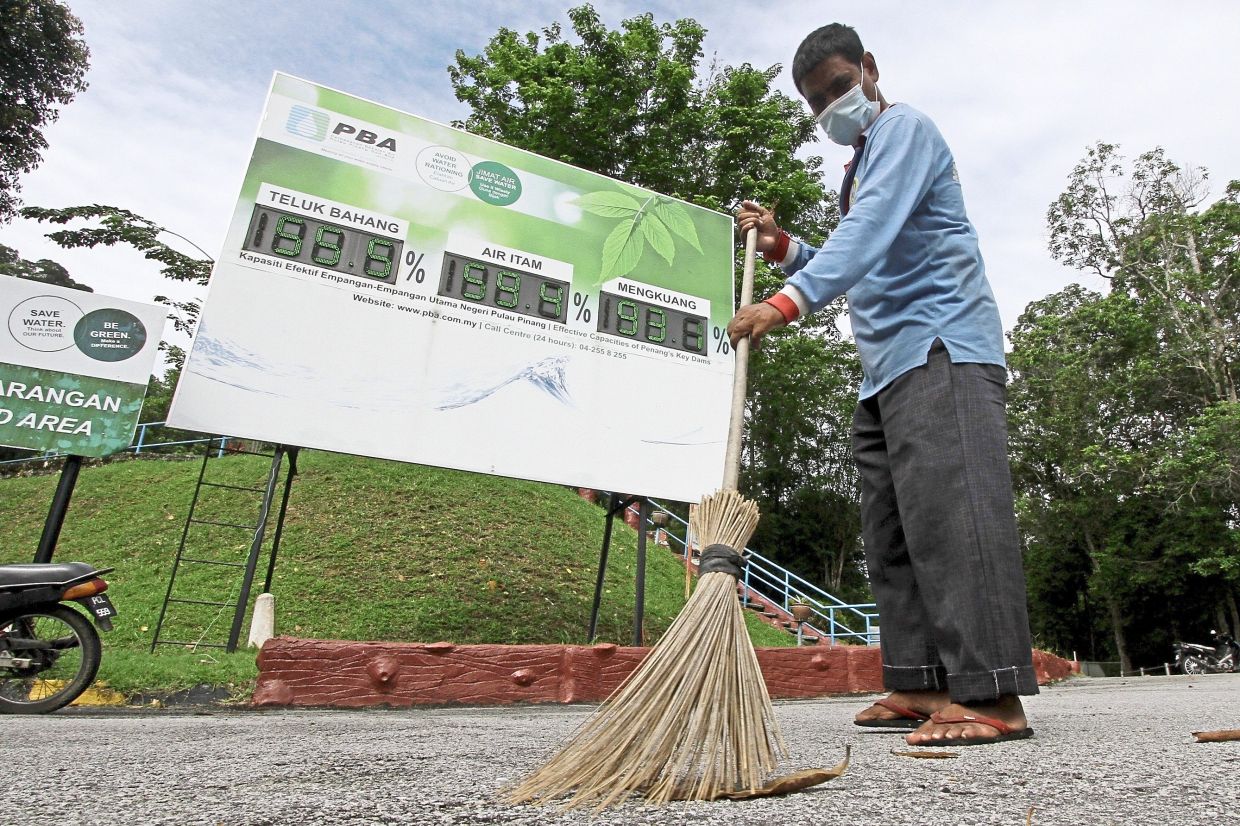 Rozali (white cap) and Soon (left) checking the condition of the Bukit DO Recreational Park in Bukit Mertajam.

A cleaner sweeping the floor in front of the water meter at Ayer Itam dam. - CHAN BOON KAI/The Star