Parwiz (right) and Mazlan holding up a drawing of traders’ proposal to rebuild their eateries that was presented to MPAJ in 2019.

AMPANG Jaya folk in Selangor affected by a proposed food court and anaerobic digestion (AD) plant project near them have launched an online campaign to object to it.

The campaign is also to gain support from the public and show their dissatisfaction to Ampang Jaya Municipal Council (MPAJ) and Housing and Local Government Ministry, which are responsible for the proposed project.

Residents, traders and social groups claim they have not received detailed information on the project from MPAJ.

The proposed RM4.56mil project will see the two facilities being built along Jalan Kerja Ayer Lama.

The traders’ representative, Parwiz Kausar claimed they were not informed about the new food court and AD plant location earlier.

He also said that MPAJ had ignored the traders’ suggestions to rebuild the stalls at the existing site.

“We even presented our own proposal to MPAJ in 2019, which was to have a two-storey building that would cost only RM2.5mil.

“During our discussions, the AD project was not brought up as it was supposed to be located elsewhere then, ” he said.

He added that they were only informed in early April of the relocation to a food court with the AD nearby.

Parwiz, who started his eatery Naan Corner in 1983, said they were also worried that the food court would not be a permanent building because a sign on the hoarding stated that the permit issued was for a temporary structure.

Mazlan Zakaria, who has operated Mak Jah Corner for the past 20 years, said it would be better to upgrade the current stalls than to build another food court.

“Not many people want to visit food courts anymore, so why build more?

“We are not against development but it should suit the needs of the people, ” he said.

A community-based initiative called “Ampang Jaya Deserves Better” has also kicked off a campaign to gather objections and feedback from surrounding residential areas.

Group founder Ariv Chelvam said the over 130 objections raised since June 20 would be sent to MPAJ.

“The authorities should also explain the rationale for not carrying out an objection process prior to approving the project, especially during the movement control order, ” he said.

Another group objecting against the proposed AD plant is the Hindu cemetery committee as the plant would be located in front of the 60-year-old Ampang/Ulu Kelang Hindu Cemetery.

The site is currently a parking facility for cemetery visitors.

It was earlier reported that the association managing the cemetery claimed that MPAJ did not discuss the matter with the committee.

MPAJ, in a StarMetro report on June 14, said a coordination meeting for the development of a food court and AD plant was held on July 7 last year and that it was attended by the affected parties.

The municipal council said no one objected to the project and that all agreed to share the parking facilities, adding that the AD would take up 22% of the 0.15ha land.

MPAJ did not respond to StarMetro’s multiple attempts to seek clarification on the issue. 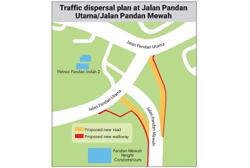