Low (right) presenting food supplies to Wong during a visit to his house in Kampung Baru Behrang Stesen in Muallim, Perak.

What was previously a favourite pastime for the 65-year-old from Kampung Baru Behrang Stesen in Muallim, quickly became a way to earn money as his savings dwindled.

When the lockdown was announced in June, Wong went further into hardship as he could not go out to fish.

Behrang Stesen MCA Wanita vice-chairman Low Kim Kee, who learned about Wong’s predicament earlier this year, said the bachelor had lost his job because of the Covid-19 pandemic and movement control order.

“He lost his source of income then but still had some savings.

“He also sold fish to support himself before the lockdown was implemented.

“We give him some money whenever he needs it so he can take care of himself,” she said during a visit to Wong’s house.

Low said her team had also helped him to apply for aid from the district Welfare Department about six months ago.

“His application was successful and he will be getting RM500 every month under the senior citizen category beginning July.

“We hope the aid will lighten his financial burden and support his daily cost of living,” she added.

Tan, who used to drive a taxi in Kuala Lumpur, suffered a mild stroke three months ago.

“It was his second stroke, after which he moved back to the village,” she said.

“He continues to go to Slim River Hospital every month for check-up and weekly physiological treatment.

“We learned about his predicament from village chief Kong Kok Wah and are now helping him to get some welfare aid,” she added. 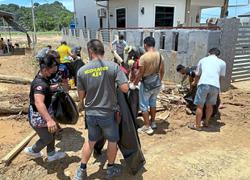