AN OLD folks home in Bandar Mahkota Cheras, Kajang is under quarantine after seven residents, including the home supervisor, were found to be Covid-19 positive.

The home’s supervisor, who only wanted to be identified as Siah, said in a phone call from a hospital ward that testing for the home’s 18 residents and caregivers was done after a resident admitted to hospital tested positive for the virus.

“The Hulu Langat district health office then carried out tests on the rest of us.

“The seven who tested positive are being treated at Cheras Rehabilitation Hospital.

“I have instructed my staff that no visitors be allowed for the time being unless for emergencies, ” he said.

Kajang assemblyman Hee Loy Sian, who visited the home to deliver food packs to residents, said his office was notified of the situation last Sunday night.

The affected residents were sent to hospital after Lim’s visit.

Hee said this was the second home in Kajang to have Covid-19 positive cases this year. The first was a children’s daycare centre.

He reminded operators of such homes that they could only get a licence to operate after the facility had been inspected for fire safety and cleared by the local authority and district health office.

“These centres must also get approval from their neighbours if they are operating within a housing area.

“There is an urgent need for such care facilities among the community but there are not enough government-approved ones.

“The public is left with little choice as it would be dangerous to leave elderly folk and young kids unattended while their parents and caregivers are at work, ” said Hee, who is also state tourism and environment committee chairman.

While the elderly care home in this case had acted quickly to contain the spread of the virus, there was a high possibility of unreported cases at illegally operated centres, he said. 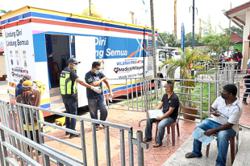