JOHOR will benefit immensely if the government decides to revive the Kuala Lumpur-Singapore High-Speed Rail (HSR) project in the future.

Johor South SME adviser Teh Kee Sin said although Singapore would no longer be part of the project after it was terminated on Jan 1, the high-speed rail link project connecting Kuala Lumpur to Johor Baru could still go ahead.

He welcomed the statement by MyHSR Corp chairman Tan Sri Esa Mohamed in his Letter to the Editor in The Star on May 19 that HSR plans were still on track.

Esa in the letter said “The HSR, as a project of the utmost national importance for Malaysia, is very much on track.”

He said the government had a clear vision of the project’s direction as well as how to achieve it, and that ongoing studies on the latest iteration’s financial and economic viability were extremely promising so far.

“The project has long been studied and discussed for more than 10 years. We all know the returns and economic benefits are not for overnight gain,’’ Teh told StarMetro.

He said the revised HSR project would encompass almost 90% of the original 350km of tracks, with stations in Sepang, Putrajaya, Seremban, Melaka and three stations in Johor, namely Muar, Batu Pahat and Iskandar Puteri.

“The project, if revised and implemented, will attract investors to Muar and Batu Pahat, hence bringing development to both towns in northern Johor.”

Teh said although Singapore was no longer in the HSR project, the Johor Baru-Singapore Rapid Transit System (RTS) Link, expected to be up and running by 2026, would improve connectivity and accessibility at the Johor Causeway.

“Hopefully, the borders between Malaysia and Singapore will reopen quickly, once the Covid-19 infection curve is flattened, and cross-border activities return to normal as in pre-Covid-19 days,” he added.

However, he acknowledged that there would be many downstream benefits from the project, with Johor standing to gain the most as it had three stations located along the track.

“This will bring development to the Batu Pahat and Muar districts.

“However, if the numbers cannot add up in terms of passenger load (due to lack of connection to Singapore), the project may end up as a white elephant and this must be avoided, more so under the current economic climate,” said Tan.

He said, however, many were of the view that Singapore might link up with the domestic line to connect to the greater Trans-Asian Railway (TAR) network in the future.

The TAR network, when initiated, would link Singapore through Malaysia to China via Indo-China countries.

“Under such an arrangement, the HSR will take on a different profile. Its role as an economic multiplier cannot be underestimated,” said Tan. 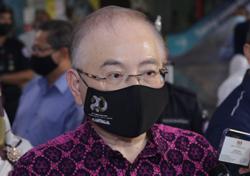