THE Malaysian Maritime Enforcement Agency (MMEA) Penang detained a Japan-registered ship with 26 crew members on board for illegal anchoring.

He said four Japanese and 22 Filipino crew members onboard had legal identification documents on them.

“But they failed to provide approval documents for anchoring and did not inform of their arrival in Malaysian waters.

“The captain and three other crew members involved were taken to the MMEA Penang headquarters for further investigation.”

Kapt Abd Razak said the case is being investigated under Section 491(B)(1)(l) of the Merchant Shipping Ordinance 1952 for illegal anchoring without a permit from the Marine Department.

If convicted, offenders may be fined a maximum of RM100, 000 or sentenced to a maximum of two years in prison or both.

Kapt Abd Razak said MMEA urges all ship owners and captains to ensure that they adhere to all necessary procedures and rules before entering and anchoring in Malaysian waters. 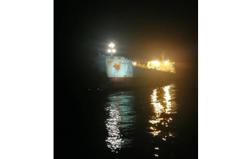