The video showing Samsolbari explaining about the vaccination programme in the Javanese language.

THE Ayer Hitam parliamentary constituency has released a video encouraging constituents to register for the Covid-19 vaccination.

The video also features Dr Wee and Johor MCA Youth chief Ling Tian Soon, who are urging the public to sign up for the vaccination programme.

Samsolbari, who is Johor agriculture, agro-based and rural development committee chairman, said the video was part of efforts to raise awareness among the people of Ayer Hitam.

“We also have the cooperation of village chiefs, community leaders as well as volunteers from the Umno branches to help the public register for the vaccine.

“We will be mobilising the Wanita Umno wing to make house- to-house visits to help those in the rural areas register for the vaccination,” he added.

In cases where no one in a household has the MySejahtera app, he said the volunteers would put them down as dependants under their own registration on MySejahtera so that the constituents can be informed of the vaccination date and time.

Free buses have also been made available to transport those from Yong Peng and Ayer Hitam to the vaccine dispensing centres (PPV) in Batu Pahat.

“The buses have been available since June 6, on two routes daily,” he added.

The first route starts from the Taman Kota Yong Peng bus stop, and it will make a pit stop at Ayer Hitam before heading to the Parit Raja Community Hall.

The second route is between the Taman Kota Yong Peng bus stop and Dewan Jubli Intan Batu Pahat, also with a pit stop in Ayer Hitam.

On an unrelated matter, Samsolbari said 14,835 food baskets have so far been distributed by the Ayer Hitam parliamentary office to those living in the constituency. 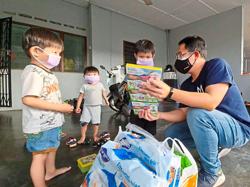