Khoo (right) shaking hands with participants of the ‘13th Penang Cheshire Agoonoree - Yearly Scouts Camp for the Disabled’ at Cheshire Home back in 2018.

He said Khoo was a prominent community leader in Penang who originated from the famous Khoo clan.

“He was active in welfare and charity works and had a heart for the needy people.

“Through the Penang State Chinese Association, he was also actively promoting Peranakan culture and a prominent member of the multi-ethnic Majlis Perundingan Muhibbah.

“Penang lost an illustrious son. I have sent my heartfelt condolences to the family, ” he said in a brief statement to The Star.

Khoo, 91, died of natural causes at his house in Pulau Tikus on Thursday.

He was also responsible for setting up Befrienders in Penang

in 1978 when the state was in the midst of becoming the nation’s industrial powerhouse.

In the same year, he started the Cheshire Home to help rehabilitate the disabled, together with Toh Puan Saadiah Sardon who was the consort of former Penang Governor Tun Sardon Jubir.

Khoo led the Straits Chinese Association and was responsible in keeping alive the ‘dondang sayang’, and the Baba and Nyonya culture in Penang.

He was presented the Tokoh Kebajikan Kebangsaan award in 1988 and the state-level Tokoh Warga Tua in 1996 for his contributions to society.

Khoo’s funeral service will be held at his residence today at 11am and the cortege will leave for burial at the Leong San Tong Khoo Kongsi cemetery.

The funeral service is limited to close family members to adhere to the strict standard operating procedure during lockdown. 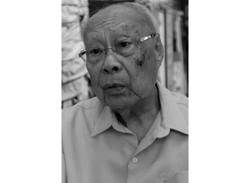