MPS enforcement officers checking on roadside traders around the municipality during the lockdown.

THE authorities are coming down hard on business premises that do not observe the standard operating procedure during the current lockdown.

They issued 22 compounds for various movement control order offences in Pusat Bandar Utara and Pasar Harian Selayang under the Prevention and Control of Infectious Diseases Act 1988, including operating outside stipulated hours.

Officers also issued three compounds to owners for employing foreign workers without proper approval and another one for placing obstructions at the back of premises.

“The enforcement operation was conducted in accordance with the jurisdiction and legal provisions set by DBKL and Health Ministry, ” DBKL said in a statement.

The public can channel complaints regarding such activities through the Integrated Public Agency Complaints Monitoring System (i-SPAAA).

“There are still businesses and traders that fail to comply with regulations, including operating without valid licences and causing traffic disruptions, ” MPS said in a press statement.

One premises was ordered to close while action was taken against nine others for operating without valid licences. — By SHALINI RAVINDRAN 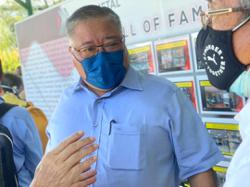