A roadblock set up to remind people to adhere to the SOP before going to the vaccination centre at Indera Mulia Stadium in Ipoh. — RONNIE CHIN/The Star

SEVERAL non-governmental organisations in Perak are calling for the National Covid-19 Immunisation Programme to be expedited as the progress is currently too slow.

Ipoh City Watch president Prof Dr Richard Ng said health authorities should go down to targeted locations like rural areas or villages, and use community halls to register people for the vaccine and also administer it.

“They must understand that many senior citizens are not IT savvy and some are not staying with their children.

“There are also those residing at nursing homes. The same goes for people with disabilities.

“Thus, more inoculation centres should be set up in all districts for the convenience of the people.

“Get volunteers, especially Chinese and Tamil-speaking ones, to help facilitate and call up registered recipients for their injections, ” he said when contacted.

“The issues encountered so far include an insufficient number of people to administer the vaccine, and the lack of vaccination centres.

“There’s also not enough monitoring in terms of implementation, resulting in many who have registered not being called for vaccination.

“Some who were due to be vaccinated did not turn up as they were unaware of their appointment or did not have the MySejahtera app so they could not check the status, especially senior citizens.

“The system needs to be improved through a reminder to all recipients, ” he said, adding that those who failed to turn up should be given a stern warning and a fine.

Perak health executive council member Mohd Akmal Kamaruddin had reportedly said on May 29 that some 238,000 people under the second phase of the national immunisation programme in the state had received their first dose.

Perak has a population of about 2.6 million people.

It was also reported that several private hospitals and clinics have been roped in to expedite the vaccination exercise.

Family Wellness Club president P. Mangaleswary said it was important that the government look into the reasons why people did not turn up for their jabs.

“We are racing against time to get as many people as possible vaccinated.

“The government could recruit qualified personnel, including retired nurses or healthcare workers from the private sector, to help out with the vaccination exercise, ” she added.

Bank officer Michael Chang, 40, said it was good that people would not be allowed to choose their vaccine as this could hamper the process.

“Let’s just focus on achieving the 80% vaccination rate for herd immunity, ” he stressed.

Chang also said private hospitals should be allowed to buy and dispense vaccines at their premises.

“If this is allowed, people can choose the vaccine they want and pay for it. This will improve the overall vaccination rate in the country, ” he added. 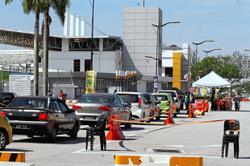