By IMRAN HILMY and R. SEKARAN

Tough life: Residents (on the right) collecting food items that they ordered online from over the barbed wire fencing at Jalan Sultan Azlan Shah near Pekan Bayan Lepas in Penang. — ZHAFARAN NASIB/The Star

THERE are about 10,000 residents from approximately 2,500 households who are affected by the enhanced movement control order (MCO) in Bayan Lepas, Penang, said its assemblyman Azrul Mahathir Aziz.

He said the residents lived in the 13 localities in the constituency, which have been placed under the enhanced MCO since Friday.

“So far, we are doing our best to help all those who are affected in these localities.

“We have our own Village Community Management Council (MPKK) members who would be there to assist the Health Ministry and Civil Defence Force personnel, ” he said when met at his operation centre at Surau Kampung Bukit in Bayan Lepas on Saturday.

Earlier, Azrul and his service centre members helped to coordinate the distribution of 500 packs of fresh chicken and other essential items to the residents. A Bayan Lepas MPKK member handing out food aid and fresh chicken to an affected resident in one of the 13 localities under enhanced MCO in the area.

He said the fresh chickens were contributed by Balik Pulau MP Muhammad Bakhtiar Wan Chik as part of the effort to ease the burden of the residents who were affected.

“The distribution of the items will be coordinated by the MPKK team members who stay in the affected localities.”

Azrul urged the residents to be patient and to cooperate with the authorities during this period.

“When receiving the food aid, please be patient.

“If you feel that there are more deserving families who really need the aid, maybe you can let them have it first, ” he said.Azrul said he was confident that the food distribution would be handled smoothly but urged those who were left out to contact him directly or the district office.

Resident Mohd Hafizan Abdul Wahid, 33, who lived at the Sri Bayu Apartment, said he and his family have been following the advice of the authorities by staying at home.

“There is nothing much that we can do.

“For the time being, we will stay at home and if we need supplies, I will go out. 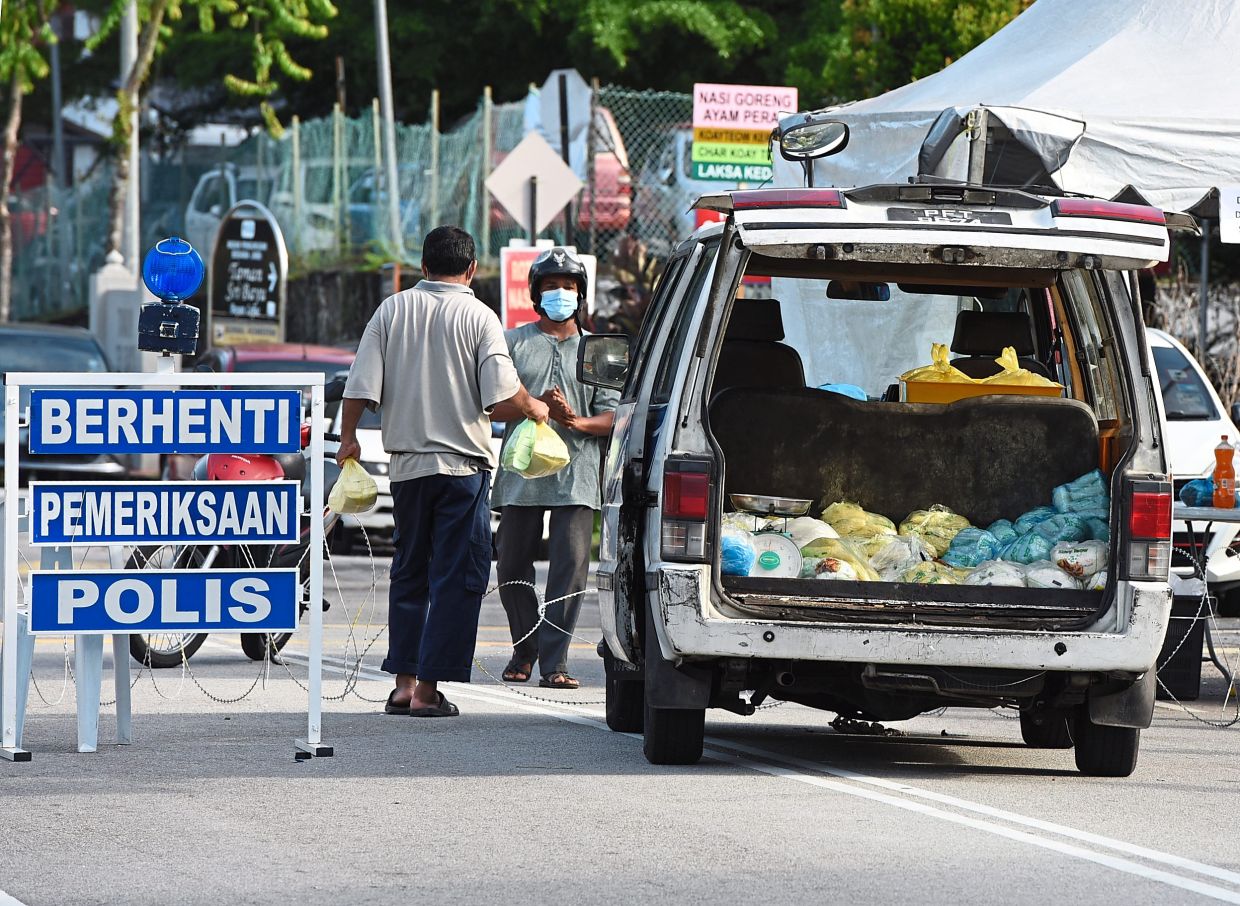 A delivery person handing over food packages to a resident from the neighbourhood.

“So far, the food aid distribution was conducted in an orderly manner and almost all affected residents received the aid, ” he said.

Meanwhile, lorry driver Sasikumar Selvaraju, 45, said he had been jobless due to the movement restriction under enhanced CMO.

“I work in a company which does renovation and now I am unable to travel.

“I don’t know whether I can sustain the month of June as I am now out of job, ” said Sasikumar, who is the sole breadwinner in the house, earning RM1,500 a month. Volunteers coming forward to help Civil Defence Force personnel who unloaded food items from a truck for distribution among residents within the 13 localities in Bayan Lepas, Penang. — K.T. GOH and ZHAFARAN NASIB/The Star

He lives in the Bayu Nyaman Apartment, Bayan Lepas, with his wife, who is a housewife and a diabetic.

“I am worried my employer will cut my salary when I am back to work.

“We could not get aid from the state Welfare Department as we were told that we were not eligible as we don’t have children, ” he said.

His wife S. Thilagavathy, 44, said the residents were living in fear as some living in the Sri Bayu apartments, who were wearing pink wrist bands, especially children, could be seen outside the apartment.

“Both of us stay home as it is definitely a risk being outside.

Nurse Wan Khairulnisah Wan Hassan, 30, said the residents of Sri Bayu Apartments were quarantined as the apartment has the highest number of cases.

“We dare not venture out, and keep ourselves locked inside all the time, ” she said. Sasikumar with his wife Thilagavathy.

Technician Sukri Kamis, 42, who stays at the Bayu Tiara Apartment, is worried over food supplies.

“I have stocked up, but the mini market here has run out of supplies and I am fearful if there will be enough food for the coming week.

“It is not safe to go out. Although I am feeling restless, I am staying put just to be on the safe side.

Architect Aananthen Ramanaidu, 55, is feeling the pressure of missing the deadline for his project submission in Kuala Lumpur.

“My office is at Bukit Dumbar in Jelutong and while I am used to working from home, certain planning with clients on designs could only be done from the office, ” said Aananthen, who lives in Taman Kenyalang running parallel to Jalan Mahkamah, which is barricaded by barbed wires. Volunteers from Bayan Lepas assemblyman’s service centre loading onto a delivery bike the food packages meant for residents in the area.

“I am trying to get a Health Ministry letter to travel and it is going to be an arduous task with the present situation, ” he said.

Meanwhile, Balik Pulau OCPD Supt A. Anbalagan said since the enhanced MCO was imposed in 13 localities in the area, no standard operating procedure (SOP) has been violated so far.

“So far, the situation is under control. There is no breach or violation whatsoever, ” he said.

Supt Anbalagan, however, advised residents to heed the regulations imposed by authorities and to follow all SOP that has been imposed on them.

“A total of 60 police officers and personnel are on duty at all 13 localities during this period and they will be assisted by personnel from the army, Civil Defence Force and state Health Department.

“Residents can contact the district police or district operation centre for disaster should they have any problems during this period.”