The boxes of food and essential items being unloaded from a truck for distribution.

Muallim senior penghulu (chieftain) Hamka Othman said that along with Hulu Bernam district penghulu Muhammad Isa Rahamah and Rela members in the district, they distributed the items to the recipients, many of whom were frontliners quarantined at home.

“The items are to help those in the district affected by the enhanced MCO.

“We have been given the trust and responsibility by the state government to present the items to the needy, ” he said.

“I also called on the people to be responsible, have self-control and practise the new norm to break the Covid-19 chain, ” Hamka added.

In line with standard operating procedures, those who took part in the distribution exercise had to be sanitised. 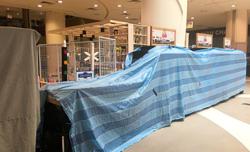