He said flash floods would normally occur, in the two areas, during downpours — with the last incident on April 17 — as there was no outlet for rainwater to flow into the river.

“Placing the culvert in Sungai Senapang will allow for this, ’’ Haffiz said after MBIP’s full board meeting.

The city council, he said, would request Johor Public Works Department (JKR) to build the culvert as soon as possible and upgrade the drainage system along Jalan J4, fronting the two residential areas.

“The project, which involves a 700m stretch and costing about RM12mil, started in 2016 and was supposed to have been completed in 2018. However, it is as yet unfinished, ” he said.

Haffiz also said that MBIP would request the developer of Taman Nusa Puncak to hand over the water retention pond located behind Kampung Baru Muafakat for the city council to manage.

“The long-term solution is the deepening of Sungai Gelang Patah and Sungai Senapang by the Drainage and Irrigation Department (JPS), ” he said.

Separately, Haffiz said MBIP would set up an animal compound for stray dogs caught in areas within its jurisdiction, next year.

“We have identified a site in Taman Impian Emas for the shelter, ” he disclosed.

He said the council hoped that non-governmental organisations interested to work with MBIP, would come forward with suggestions on the best way to run the place.

Apart from providing shelter for stray dogs, Haffiz said the public were welcome to adopt the canines. — By ZAZALI MUSA 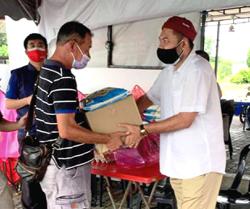