BUDDHISTS are participating in virtual Wesak Day celebrations for a second consecutive year due to the movement control order.

The Buddhist Maha Vihara (BMV) Temple in Brickfields, in encouraging devotees to stay home, has expanded its Wesak Day e-programmes to include Buddha puja, guided meditation, sermon and religious talks.

“Although we are looking at ways to expand our online platform, there are still some who prefer the personal touch of visiting the temple, ” he said, adding that virtual programmes would be practised as long as the Covid-19 pandemic continued.

Under the latest standard operating procedure (SOP) announced by the National Unity Ministry, temples are off limits to devotees.

Only the chief monk and 10 committee members are allowed at the temple on Wesak Day and only one ritual session between 6am and 2pm is permitted.

Processions are banned too.

Last year’s celebration was also observed online due to restrictions brought on by the pandemic.

It is a day that sees devotees visiting temples for prayers, offerings and chanting but such devotional practises will be online via social media platforms this time.

“While we won’t be able to organise any in-person activities this year, modern technology has allowed us to hold our activities online for devotees, ” said Malaysia chief high priest Datuk K. Sri Dhammaratana during an interview with StarTV at the Buddhist Maha Vihara Temple in Brickfields, Kuala Lumpur.

“I humbly appeal to all devotees to take care of themselves by staying (and carrying out their prayers) at home, without participating in physical activities (at temples).

“Please be united and avoid participating in outdoor activities.

“We will be able to gather and have more events when the pandemic is under control.”

Temple activities will be live streamed via facebook.com/groups/BuddhistMahaVihara.

Sponsorship of light offerings and flowers to Buddha as well as contributions for the monks’ welfare, temple maintenance and dhamma sermons/talks can be done via http://bit.ly/bmv-wesak2021.

In Petaling Jaya, the Chempaka Buddhist Lodge resident monk will chant alone and this will be streamed online.

Its president Lawrence Phuah said they had scheduled for three monks to be present to lead the ceremonies but now, they were only allowed one at the temple in Taman Sea.

“We also prepared all the decorations and prayer offerings in anticipation of a limited number of devotees to be present.”

He said the change in SOP should have been announced earlier to allow temples to be better prepared.

Devotees can bathe their Buddha statue at home while chanting sutras.

YBAM also provided a guide on the home-based Buddha bathing ritual and an alternative for those without a statue at home.

Other activities offered by YBAM and MBA include e-light offering, online blessings and online chanting.

Devotees can chant along with the special prayers, request prayers from resident priests and make arrangements for incense offerings. 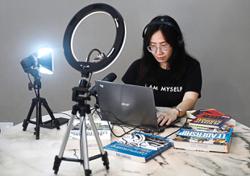