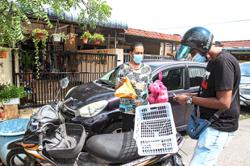 RUMBLE strips are being considered at the roundabout outside Padang Chetty to get motorists to slow down as they enter the Jalan Raya Barat/Jalan Bukit Jawa/Jalan Dato Hamzah intersection.

Klang Municipal Council’s (MPK) Engineering Department director Zamri Othman said minor collisions had occurred and there was a need to ensure motorists reduce their speed as they approach the roundabout.

“Council engineers have advised rumble strips as a better option than road humps.

“Road humps are not suitable as two-wheelers will be impacted.

“Rumble strips will alert drivers as an audible sound will be released.

“The roundabout is an alternative to the traffic signal intersection plan.

“It was built to ease traffic movement into Jalan Bukit Jawa instead of driving through Jalan Tengku Kelana, ” said Zamri.

He advised motorists to drive slower upon entering the roundabout until the rumble strips are installed.

MPK engineer Azman Wahid said the roundabout was built in such a way that drivers or riders do not have to speed to “beat the traffic lights, ” as often seen at a traffic light intersection.

Panot said the roundabout was able to cope with increased traffic during peak hours and had helped improve air quality as motorists do not need to stop compared to a signalised traffic intersection.

Road users had also requested for reflective cat’s eye to be installed for better night driving and suggested the words “perlahan” (go slow) be painted on the Jalan Dato Hamzah slope just after exiting Jambatan Kota. — By EDWARD RAJENDRA