A council employee arranging decorative bamboo shoots made from recycled items to ‘cook lemang over a firepit’.

Each recycled material has been creatively upcycled into a full-scale Hari Raya themed decoration featuring a kampung house,

Led by MBPP’s Urban Services Department director Xavier Sebastian, the project was carried out at Komtar by the department’s special actions unit members under the guidance of chief Ahmad Nizuar Nordin.

The striking work is now on display at Level 3, Komtar, until the end of the month-long Hari Raya celebration.

Besides allowing visitors to capture memories by taking selfies to be shared on social media, the project is also meant to create awareness on recycling, where nothing goes to waste.

Ahmad Nizuar said their next project would be Merdeka-themed decorations for National Day, where they would reuse existing recycled materials.

Jagdeep commended the team, saying the decoration was in line with the state’s green initiative to make recycling a way of life.

“Syabas to them as these efforts will go a long way in reducing the waste sent to landfills, ” he said.

This is not the first time such an effort is undertaken by MBPP’s Urban Services and Landscaping Departments.

It has been actively promoting beautification of a few community parks in the state using recycled materials.

One such initiative is the park beautification project with upcycled discarded products at Taman Jajar (Linear Park) in Sungai Ara which was turned into a ‘dinosaur land’.

The park on a 3.8ha plot is the biggest linear park on the island and the project had set new standards in the way discarded tyres, plastics and glass are used in

MBPP is aggressively pushing for recycling of discarded products to reduce waste taken to the Pulau Burung landfill, which amounts to 600 to 700 tonnes a day. 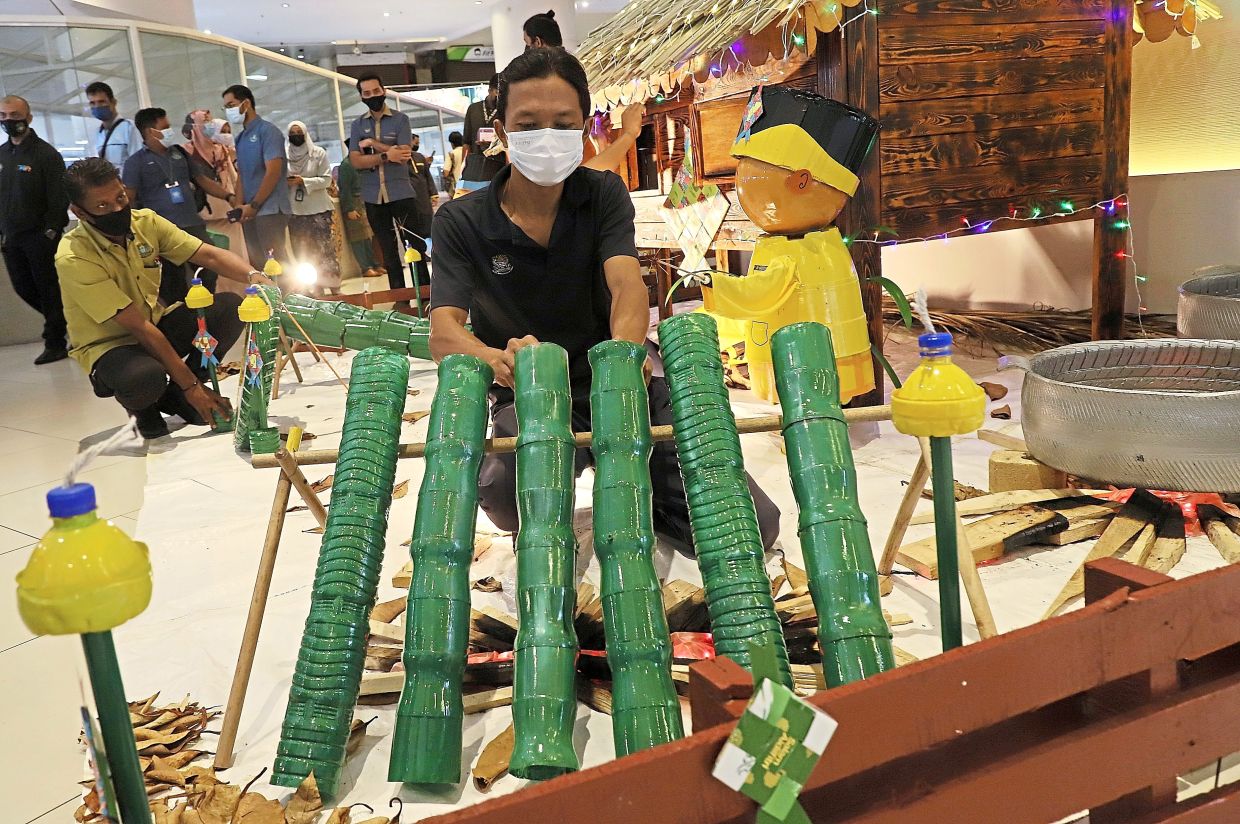 A council employee arranging decorative bamboo shoots made from recycled items to ‘cook lemang over a firepit’.

Jagdeep (in grey jacket) performing the launching ceremony. With him (from left) are Ahmad Zuhairi, Yew and Addnan.

A council special actions unit member installing one of the figurines.