Chow presenting goodies to a recipient. With him are (from right) Swarn and Shahul.

NINETY people with disabilities (OKU) were given aid in the form of cash and a goodie bag during a breaking fast event at the community hall in Lebuh Acheh, Penang.

Each person was given RM100 and basic items like cooking oil and rice at the event organised by the Penang Island City Council and Penang White Cane Association on Friday.

They also received an electronic Braille Quran and were treated to a chicken briyani meal.

Chow said this was the eighth time that such an event had been organised by the association.

He added that the association, which was formed in 2014, had been very active in organising numerous social and sports programmes plus free medical check-ups for its members.

Shahul Hameed, who donated RM1,500 to the association, said he bore the cost of holding the breaking fast event while the cash aid was donated by well-wishers. 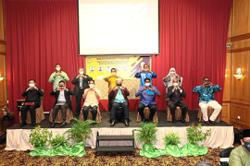 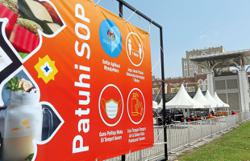