Azman (right) and Mohd Khurzaime making bintang raya together at his home in Jelutong, Penang before the start of the latest round of MCO. — CHAN BOON KAI/The Star

FOR two childhood friends, Ramadan is not just a time to catch up with one another, but it is also time to practise the traditional craft of making bintang raya.

Azman Abdul Aziz and Mohd Khurzaime Illyas, both 37, used to make bintang raya for their family and fellow villagers to welcome Hari Raya Aidilfitri when they were young.

They hail from the same village in Kampung Masjid Melayu, Acheh Street in George Town, Penang.

Azman, who is a hotel supervisor, said he learnt the craft when he was 15.

“It is a yearly affair for me to craft the decorative stars.

“Bintang raya is one of the symbolic ornaments to enliven the Hari Raya Aidilfitri atmosphere that everyone looks forward to.

“Mohd Khurzaime and I used to make bintang raya at home and post our craft on social media. From there, people started asking us to make the ornaments and they offered to pay us for our hard work.

“Since then, both of us have been making bintang raya to generate extra income for the festive season,” he said recently when met at his apartment in Jelutong, Penang, before the nationwide movement control order was imposed.

“We produced around 60 stars last year but decided to only make around 30 stars this year.

“Since we only do the craft after work, we are afraid that we cannot produce them in time for our customers.

“I am thankful that my 12-year-old son Al’liff Shahputra Azman is interested in the craft and offered to help me do the simple stuff, like pasting glass papers and cutting the bamboo sticks, ” he said.

Meanwhile, Mohd Khurzaime, who is a civil servant, said it would normally take them about five hours to produce a bintang raya.

“Although there are only a few materials needed such as bamboo sticks, glass paper and LED fairy lights, the process is detailed as everything has to be precise.

“We have to shape the bamboo and stick the glass paper correctly before putting up the lighting and wiring.

“Before we give the stars to our customers, we have to test the lighting.

“Since everything is handmade, we have to focus well and do everything step-by-step, ” he said.

Mohd Khurzaime said they would usually start making the craft after breaking fast until midnight.

“On days when we have a rest from work the following day, we would sometimes work until sahur the next morning.

“Due to lack of time, we do not take in any special orders this year.

“ We only have two patterns featuring stars with five and 10 points.

“Since the stars are made of recyclable materials, they can be reused for a few years if they are put indoors with proper care, ” he added. 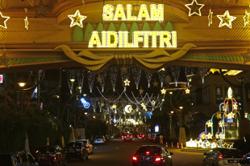