Residents want the unfinished, illegal toilets at the side of the playground in Bandar Menjalara 62B to be torn down.

According to residents, the structure was built by current Bandar Menjalara 62B Residents Association (RA) chairman Low Peng Hoong, who had portioned off a plot of the green area.

The residents claimed Low had built two toilet cubicles without permission from the authorities and cemented the ground in November last year.

They also claimed he had placed hardware and construction materials there, damaging the basketball court next to it.

Resident and former RA chairman CT Lee said all the residents wanted was a clean and green area for the neighbourhood.

“The current RA members should remove the toilets, zinc hoarding surrounding them and cement flooring.

“It used to be a place where nearby residents planted flowers but it’s all gone now, ” he said.

The basketball court next to the playground is in poor condition, with damaged or missing hoops.

“The materials have since been removed but the toilets are still there.

“I was told that the chairman had appealed to DBKL and said he would remove the toilets but the structure remains, ” noted Yee.

DBKL, he added, had said it would check on the matter.

“We do not approve of any structure built without permit.

Segambut Federal Territories Residential Representative Council (MPPWP) Datuk Daniel Ling, who was also present, said construction of the toilets must be done according to procedure.

“Low should apply for a permit from DBKL and I hope the residents here can settle this matter amicably, ” he said.

When contacted, Low said the toilets were built for the convenience of residents using the playground.

He added that he would be applying for a permit for the toilets.

“We will get the necessary approvals, ” said Low. 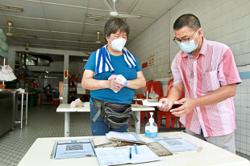