Zareen holding a hamper she prepared for a customer.

ZAREEN Azli is prepared to have her hands full with making and delivering Hari Raya Aidilfitri hampers again this year as the interstate travel restriction continues.

The 50-year-old mother of five, who has been creating hampers for over five years, said the Covid-19 pandemic has unexpectedly opened up her home-based business to a new group of customers since last year.

“Previously, most of the orders I received were from companies or government agencies that wanted to give their employees hampers in conjunction with the festive season.

“This includes children working in cities who cannot spend Hari Raya with their parents as well as couples living apart from each other, ” she said.

The hampers are priced between RM50 and RM400, depending on the size, design and content.

“Apart from Hari Raya biscuits and gifts, some customers also request that we put duit raya in the hampers for their parents and siblings, ” she added.

Last year, Zareen and her husband spent the first three days of Hari Raya delivering hampers to their customers’ loved ones.

“Initially, only my husband, son and I were involved in delivery.

“But when the orders started to increase, especially as Hari Raya drew closer, we had to employ several runners to help us with the deliveries, ” she said.

Last year, Zareen received orders from about 50 people and most of them wanted the hampers delivered to an average of three to four individuals.

“Although it is exhausting to rush from one place to another, it is worth it when you see the joy in the recipient’s eyes.

“It is a bittersweet moment as you are happy for those receiving the unexpected surprise, but feel sad for them because they are away from the people they love, ” she said.

Zareen added that orders poured in earlier this year compared to last year.

“Last year, we started receiving orders about two weeks ahead of Hari Raya but this year, requests came in even before Ramadan started.

“Orders are expected to increase over the last few days before Raya and during Raya, ” she added. 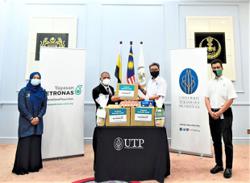