Pretty festive stories at the malls

The right ambience gets shoppers in the mood to browse and buy. This is why malls go to such great lengths with their festive decorations.

At Berjaya Times Square Kuala Lumpur, for example, the sea of hanging lanterns illuminate a scene of a bustling village marketplace, its myriad stalls offering a variety of merchandise.

Over in Sogo, flowery banners take centre stage at its main lobby, and evoke a summery charm overhead as shoppers look over the products on offer.

At other malls, retail powerhouses also seem to tug at the heartstrings with props that reminded one of an older era.

For shopper Intan Surya Yunos, the display of a life-size traditional Malay house at 1 Utama Shopping Centre was more than just a Hari Raya prop; it rekindled cherished memories of trips back to her grandparents’ house in Melaka.

The 1970s-style furnishing and the baby bamboo cradle played a part, but it was the structure’s zinc roof that really got her reminiscing. “I remember us having a zinc roof just like this kampung house here.

“During the day, it would be very hot, but at night, the house became cold, ” she said.

At the Curve, the visual artists even opted to fix the traditional kampung house with rusty zinc roof sheets for an added touch of authenticity.

There is even a wau and bicycle tyre tube sitting on top of this zinc roof.

Those who grew up in the kampung may well remember the anguish when a prized kite breaks free from its strings and lands on the rooftop.

And the tyre tube? Possibly a failed attempt to get the stranded wau off its unfortunate position.

In evoking memories of an era when life was more about simple pleasures, it matters that visitors also have a chance to immerse themselves in the exhibits.

At Suria KLCC, Alamanda Shopping Centre and Mesra Mall, for example, there are chicken coops, swings and outdoor huts where shoppers can try their hand at traditional Malay games like congkak and five stones. Elyas and Elya taking a break from having fun in a traditional Malay kitchen at Mid Valley Megamall.

Over at Mid Valley Megamall, an open concept Malay house allows shoppers to explore the traditional kitchen of a bygone era when electrical appliances were unheard of. Seen playing masak-masak were teenagers Elyas Irfan Mohd Effrizal and his sister Elya Shabeera. They checked out the traditional aluminium love letter moulds set over a faux charcoal grill and stirred a cauldron hanging over a wood fire seemingly filled with a dodol mixture.

“It gives us an idea of how our great-grandparents lived their lives, though we cannot imagine cooking the same way they did seeing that we are so used to modern appliances at home.”

Looking into all matters counts too, when it comes to visual displays.

Leading to the entrance of Fahrenheit88 is a wall garden framed by faux coconut trees.

Conceptualised together with plant experts, the green varieties were selected to ensure they could withstand the midday heat at the outdoor location along the centre’s pedestrian walkway.

Meant as displays of public art, the set-up also has to adhere to safety standards. At Intermark Mall, a coconut tree stands bent at an angle of nearly 90 degrees.

It acts as a lush canopy for a tropical village setting within this city mall.

The fibreglass-covered structure has a metal frame with a base wide enough to ensure stability, with another pole supporting the bent tree.

At IPC Shopping Centre, an LED screen at the concourse encourages interactivity through augmented reality features.

Visitors are invited to capture picture-perfect moments against the festive decorations.

At Da Men Mall, shoppers can take selfies on a crescent moon beside a fantasy-themed flower garden and at over 20 other spots in the mall.

Such opportunities don’t just come at ground level but from above as well. The giant lanterns at The Gardens Mall sport a batik sarong-themed patchwork design.

The giant lanterns at The Gardens Mall, for example, are a case in point as visitors admire the batik sarong-themed patchwork design.

What is Hari Raya Aidilfitri without great deals and bargains?

shoppers are constantly reminded of the many deals offered by its tenants on advertising billboards.

Check out its social media pages for family-themed contests. 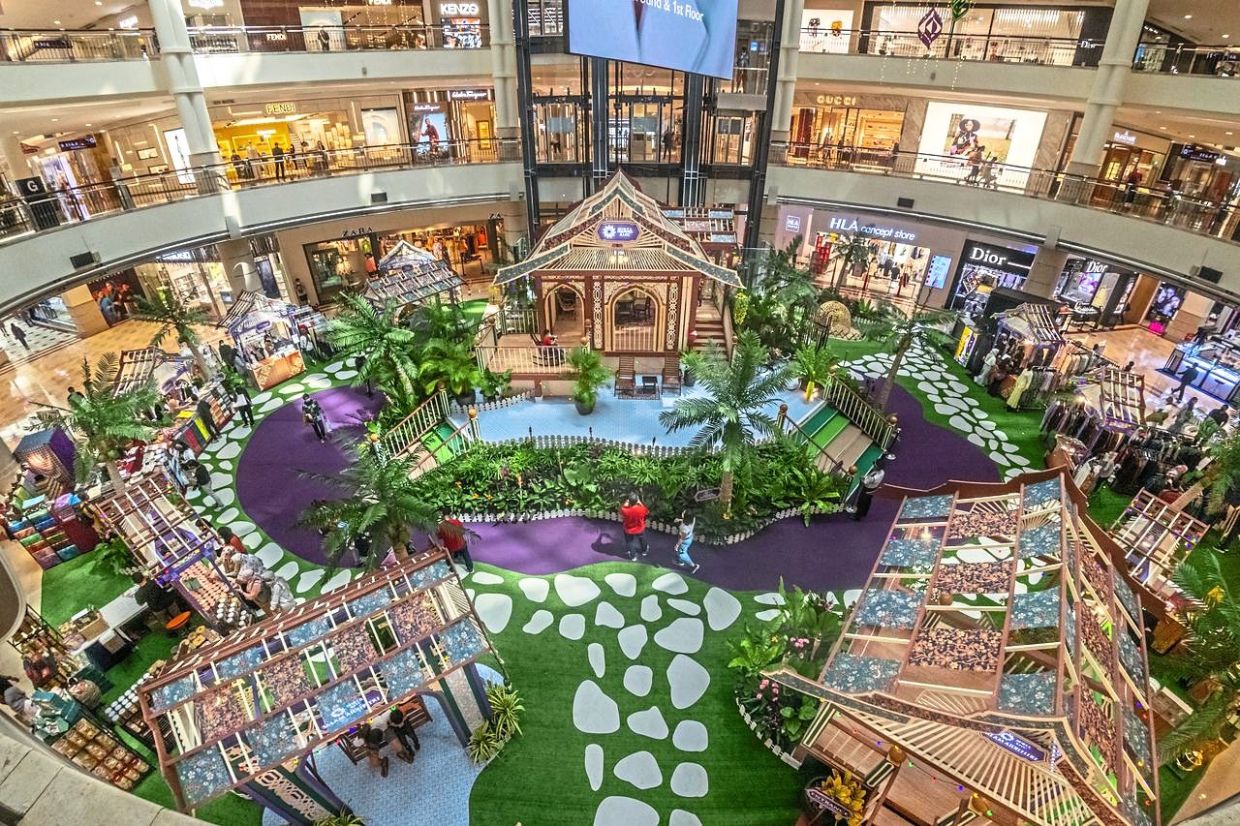 In Sogo, flowery banners hang from above at the main lobby.

A kampung house with a rusty zinc roof at the Curve.

At Da Men Mall, shoppers make use of this crescent moon decor for photo opportunities.

The Raya scene at Suria KLCC.

Throughout IPC Shopping Centre, there are several spots where visitors can take picture-perfect shots.