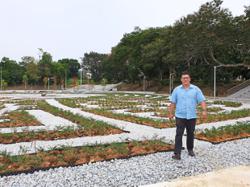 RENAMING Padang Chetty in Klang’s Little India to Dataran Majlis Perbandaran Klang would erase all the hard work that had gone into building the business enclave into a tourism attraction.

“We must keep the name Padang Chetty as it has cultural, historical and economic value, ” he said.

Tan added that instead of spending taxpayers’ money on a new signage, funds should be used to improve the lives of people in Little India.

“I stand with the stakeholders of Klang’s Little India in objecting to Padang Chetty’s renaming by Klang Municipal Council (MPK).

“It was done without consulting the people. Such a unilateral decision must be opposed, ” he said.

News of the name change had angered many locals and became the talk of the town over the week.

Councillor M. Nalan objected when the new name was announced, and Ahmad Fadzli said the matter should be discussed at a closed-door meeting.

“It is akin to erasing the Indian community’s cultural identity, ” he said.

Kota Raja PKR youth chief Jestin Raj said MPK must retain the original name of a place in recognition of its past.

“Doing this would foster unity, while reflecting the town’s history and identity, ” he said.

Klang Gerakan youth chief Tan Kok Chong said with the refurbishment, Padang Chetty provided a unique place for people of all ages and races to meet and mingle.

“I hope Ahmad Fadzli will think deeply on this matter and that the name Padang Chetty will be emblazoned at the entrance, ” he added.

In October 2019, MPK proposed that the field be renamed Taman Warisan while in April 2009, the council renamed the field Laman Sari but had to back down after public backlash.