Tribunal orders seller to pay RM1,500 for modem that was never delivered 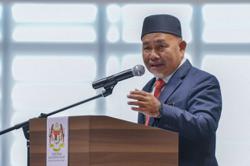 A FACTORY assistant manager in Kluang, Johor thought he got a good deal buying a pre-owned WiFi modem advertised on social media.

Ahmad Akhmal Anuar said the price of RM1,500 quoted by the seller was slightly lower than a new one.

The 31-year-old claimant communicated with the seller from Jeram, Kuala Selangor on Nov 14,2020, to seal the deal.

“I deposited payment into the seller’s bank account the same day, ’’ Ahmad said when met outside the Johor Baru Consumer Claims Tribunal at Menara Ansar in Johor Baru.

He said the seller confirmed receiving full payment for the modem and promised to send the item via courier after a few days.

On Nov 15,2020, Ahmad had to return to his parents’ home in Ampang, Selangor, due to a family emergency.

“I sent messages to the seller the next day telling him that I would collect the item from him since I was in Selangor, ’’ he said.

While the seller initially responded and agreed to meet, he later blocked Ahmad’s calls and messages when asked for his address.

The claimant then scrolled through the seller’s Facebook page and found that he had promoted other items for sale like fighting fish and bicycles.

“When I posted that I was cheated by the seller, others who were scammed by him also shared similar comments, ’’ added Ahmad.

Tribunal president Norsiah Ujang ordered the respondent, who did not turn up for the hearing, to return RM1,500 to the claimant within 14 days.

In another case, a civil servant was cheated of RM5,350 when buying electrical appliances he found online.

Abdul Rouf Ruslan, 38, said he paid for a television, washing machine and refrigerator in the last week of January after seeing the items on a classified advertisement website.

“The items were supposedly displayed at a property development project show house in Johor Baru, ’’ he said.

Abdul Rouf said after he paid RM5,350, the company promised to deliver the products to his house in Pasir Gudang.

He said the Kuala Lumpur-based company claimed that the items were for sale as the show house was to be handed over to a buyer.

“I waited for two days but the items never arrived. My calls and messages to the company went unanswered and my number was blocked, ’’ he said.

Norsiah ordered the respondent, who was not present at the hearing, to reimburse RM5,350 to the claimant within two weeks.

Those who need assistance regarding tribunal matters can call 07-227 2828.