JOHOR government has been receiving complaints about the increase in price of chicken following a sharp price hike of chicken feed from overseas.

“The issue has caused unhappiness among consumers.

“Our checks show that there is an increase in the price of corn on the international commodities market, namely the Chicago Board of Trade, ” he said, adding that he has directed his officers to carry out statewide checks at public and wholesale markets.

Dr Chong said a slight price increase was acceptable but those trying to profiteer from the situation would face action.

He said there was no supply disruption in Johor so far.

“No one should take advantage of the situation to increase prices, ” he advised.

He added that the Domestic Trade and Consumer Affairs Ministry has carried out checks at 4,165 premises statewide in the last four months.

To date, he said, some 124 notices have been issued to businesses.

“We have deployed some 200 personnel to carry out checks in the state, ” said Dr Chong.

He urged the public to provide information on any price increase, and not just for chicken but other meats and vegetables as well.

There are various channels for the public to forward their complaints to the ministry, including via the call centre and the Ez ADU app.

State agriculture, agro-based and rural development committee chairman Datuk Samsolbari Jamali said Johor was among the top producers of chicken nationwide with an annual production of more than 379,749 tonnes.

“I also heard that in some places, chicken cost up to RM10 per kg.

“In my area of Ayer Hitam, the price is about RM7.50 per kg, ” he said, adding that he would discuss with the relevant agencies under his portfolio to find out if there was adequate supply in the state and how extensive the effects were from the price increase of chicken feed.

Asked whether they would permit import of chicken, he said there was no need for that now as such a move could lead to other problems. 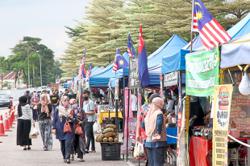