Over RM88,000 in incentives for 38 Penang athletes 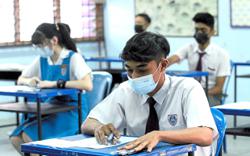 Angelica (left) and Ariff congratulating each other after receiving their incentives.

A TOTAL of 38 Penang athletes were chosen to receive education incentives and scholarships to assist them in their education, career and welfare.

A total of RM22,200 were given out under the one-off higher education incentives and another RM66,100 were allocated under the PSSC sports scholarships.

“I received RM800 as part of the one-off higher education incentive and RM3,200 under the PSSC sports scholarship.

“The scholarship will motivate me to work harder in both sports and academics.

“I have been playing tenpin bowling since I was 12 years old.

He is now pursuing a diploma in accounting at a college in Penang.

“I have bowling training from 5pm to 8pm, five days a week.

“I usually have to rush to my training centre after classes.

“It takes a lot of discipline to juggle between sports and studies so that I can excel in both, ” he said.

His ultimate goal is to join the national tenpin bowling team and represent the country in the South East Asian (SEA) Games.

As for floorball player Angelica Natasha Anthony, 22, she was exposed to the sports by her high school friends when she was 14.

“It has since become my passion. I represented Malaysia in the SEA Games in Philippines in 2019 and we managed to bring home a bronze medal.

“My aim is to represent Malaysia again in the next SEA Games.”

Angelica, who is doing her degree in public relations at a private university, said she used to have intensive training before the movement control order (MCO).

“I had to attend classes in university in the mornings and rush to my training in the evenings.

“I only had time to complete my assignments late at night.

“However, due to the MCO, many training sessions were put on hold, ” she said.

Angelica received RM1,000 under the one-off higher education incentive and RM7,200 under the PSSC sports scholarship.

“I believe our dreams and aspirations to sustain the development of sports and empower the role and talent of human capital in achieving Penang2030 visions are on track.

“There are two types of assistance under PACE including the one-off education incentive, which is a special assistance to state athletes who received offers to further their studies in higher education institutions in Malaysia.

“As for the PSSC sports scholarship, it is awarded to those who represented Penang in Sukma.

“Besides these two aids, Penang government through PACE has fully supported efforts to create a state athlete welfare scheme (SKAN) especially to look after

To build a progressive career path for state athletes, the Penang Junior Coaches programme under PACE will be introduced to give

former athletes or state athletes the opportunity to involve themselves in the field of coaching as a career path besides helping to introduce and develop sports in primary schools.

“Through a survey session on sports coaching conducted by PSSC in all schools in Penang, 145 primary schools provided feedback and 81 of them applied for coaching assistance from former athletes.

“The state government hopes that the platform can be a catalyst for success in producing more competitive athletes in the future, ” he said. Angelica (left) and Ariff congratulating each other after receiving their incentives.

The recipients rejoicing with Chow (middle) together with other state leaders and sponsors during the PACE programme at a hotel in George Town, Penang. — CHAN BOON KAI/The Star 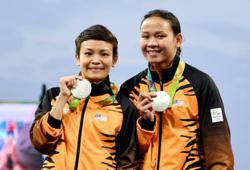