THE Sri Subramaniar Temple in Tampoi has an assistant marriage registrar for the first time in its 91-year history.

Businesswoman K. Mohana, 52, who has been the temple’s treasurer for the past six years, received her letter of appointment from the National Registration Department (NRD) in January.

Mohana said she was nominated by the temple committee for the position.

Clearly delighted by the appointment, the mother-of-three from Kulai said it was an honour to be the temple’s first assistant marriage registrar.

“I am excited. Being the only woman in the temple’s management, I see this as an achievement.

“I thank the committee for giving me this task, ” she said.

She said having an assistant marriage registrar in the temple provided ease and convenience to couples registering their marriage.

“Previously, couples would have to register their marriage at the NRD office before they can perform the Hindu rituals at our temple.

“Now, the temple has become a one-stop centre and they can conduct the rituals right after the marriage registration without having to travel to different locations or select two different dates, ” she said.

Meanwhile, temple chairman K. Arumugam said Mohana’s appointment was another feather in the cap for them.

“Last year, our temple received a tax-exempt status after waiting for 18 months.

“In early March, we also opened the first car wash centre run by a temple, located behind our premises, as a way of generating more income, ” he said.

He added that although the temple’s donations were affected by the Covid-19 pandemic, it did not stop them from conducting various social activities such as food, grocery and medical aid distribution as well as back-to-school programmes to help B40 groups and children from underprivileged families. 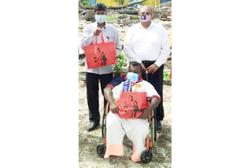