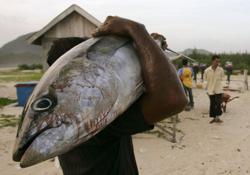 OUT of 200 tuna fishing licences to be issued by the Malaysian Government, only 10% were taken up by fishermen despite the large potential of the industry.

He said Malaysian fishery companies needed to be more competitive to maximise the tuna fishing potential in the Indian Ocean.

“As of March 31, tuna vessels made 30 landings in Penang Port, an activity which is going on uninterrupted by the Covid-19 pandemic, ” he said.

Kiandee, who also visited the Fisheries Research Institute in Batu Maung, said the private sector would be at the forefront in the development of the industry.

A total of 10 strategies, including plans under public-private partnerships, were outlined in the Tuna Industry Strategic Plan 2021-2030 which will synchronise with National Agro Food Policy 2.0.

“One of the strategies is to have 70 Malaysian tuna vessels in the Indian Ocean by 2030.

“The public-private partnership strategy is not only confined to fishing but also to develop the service and logistics industries such as development of ports, transport, storage and processing, ” he said.