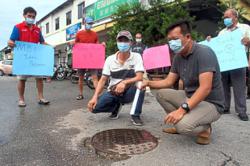 Flashback of StarMetro's story on March 30.

THE sewerage treatment plant near Pusat Bandar Baru Bercham, Ipoh, will be repaired to fix the “stinking manhole” issue plaguing shopowners there.

Ipoh City councillor Albert Ho said it was decided at a meeting that the developer of the commercial area would be responsible for repairs.

Ho said the non-functioning treatment plant was the primary cause.

“The developer should go back to the old design as there is no need to use the latest technology, ” he said when contacted.

Shopowners in the area had reportedly faced the problem for many years and it had worsened last month.

StarMetro reported on March 30, that they would start their day by washing away smelly sewage that seeped out from the manhole in front of their shops.

Apart from Ho, the meeting was attended by representatives of Ipoh City Council, Indah Water Konsortium (IWK), the developer and the National Water Services Commission as well as Bercham assemblyman Ong Boon Piow.

He said there was no proper handover of the treatment plant between the developer and IWK after it was built more than 25 years ago.

“The treatment plant is still under the jurisdiction of the developer and they are responsible for it, ” Ho said, adding that owners of houses and shops near the area had not received IWK bills since 1994.

The developer had been advised to write in to IWK once repair works were done, to hand over the treatment plant, he added.

Ho said the toilets became clogged because the treatment plant was not functioning.

“Some shopowners have connected the sewerage pipes to the drain outside their shops.

“They will have to get the contractors in again to reconnect the pipes to the treatment plant, ” he added.

Seafood restaurant owner Alex Tai said he was glad that a solution had been found.

“I hope the developer will carry out the repairs soon because the smell from the sewage is still present.

“The city council should continue to follow up on this matter, ” he added. 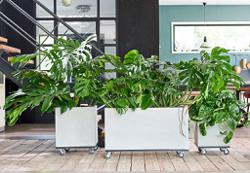