The new year, known as the Sri Plawa Naama, saw some 100 men, women and children dressed in their traditional finest, offering prayers to Sri Vengkateswara Swamy to invoke blessings for a bountiful new year.

A kolam drawn using white rice flour, thoranam (hanging decorations) and banana trees flanking the entrance of the temple greeted devotees and visitors to the celebrations.

TAM Penang chairman P. Rama Raoo said the celebrations were scaled down this year due to the Covid-19 pandemic.

“This year, we are focusing on the religious aspect of the celebration, with members coming together and enjoying traditional Telugu dishes prepared by TAM members, ” he said at the event recently.

He explained that the word Ugadi meant ‘new era’ (uga) and ‘new beginning’ (adi) and the event is celebrated on the first day of the first month of the Telugu calendar.

Rama said preparations begin about a week before the new year, with shopping for new clothes and other items for the festival with much excitement in the air.

“On the day, family members wake up early in the morning at about 5am, have their oil head bath, don new clothes and offer prayers.

“The women of the house then prepare the Ugadi Pacchadi which

“The different tastes are also to convey the idea that man should handle and balance his life on earth so that he can live a beautiful life, ” said Rama.

He said the different tastes of the preparation when mixed together resulted in a flavourful dish, which is usually taken on an empty stomach after prayers in the morning.

This is then followed by a hearty lunch usually served on banana leaf.

Priest S. Janardhanan Iyengar said the prayers for new year are for the members’ health, wealth, prosperity and success.

“It is also for a safe environment, harmony, peace and unity among the people in our country, ” he said.

“Ugadi is also the most auspicious time to start new ventures, ” he added.

Devotional songs (bhajans) were also sung after the reading of the panchanga, followed by a sumptuous dinner treat of vegetarian dishes for those present. 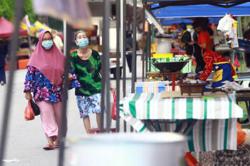