Kaysarvan, who suffers from a spinal disease, works in the bookbinding unit of Jaro.

THE Johor Area Rehabilitation Organisation (Jaro) in Johor Baru offers a lifeline for those with disabilities to gain a source of income.

V. Kaysarvan, who is Jaro’s longest-serving employee, can certainly attest to this, having worked at the centre in Jalan Sungai Chat for 29 years.

The physically disabled 73-year-old hopes to work for two more years before calling it a day.

Before joining Jaro in 1992, Kaysarvan, who suffers from a spinal disease, worked in a factory manufacturing packaging boxes but quit when his spinal condition deteriorated.

“I had tried applying for jobs at factories in Johor Baru but nobody wanted to hire a disabled person like me.”

He said friends suggested he try his luck at Jaro as the organisation had helped disabled persons find jobs to be independent.

“I am happy working here as we are all like one big family, ” said Kaysarvan, who lives with his 65-year-old sister in Desa Rahmat, Tampoi.

Another Jaro employee is Lily Mustafa, who has been working at the organisation for about 15 years making soft toys.

The 65-year-old grandmother, who lives with her daughter in Larkin, said she had no problems making five soft toys daily despite having very limited use of her hands.

“I had no experience making soft toys. But over the years, I have improved my sewing skills and am happy with the end product, ’’ said Lily, whose monthly income is enough to support herself.

Hearing-impaired Shahrom Samad, 61, started as a rattan basket weaver at Jaro when he was 16 but left to work in construction after 10 years.

He toiled as a construction worker for about 20 years before returning to Jaro in 2018.

“Working at a construction site is no longer suitable for me as age is slowly catching up, ” said Shahrom, who responded to the questions by writing down his answers.

His experience working in construction has come in handy as he is good at repairing things.

Jaro general manager Joseph Roy Arputham said some 23 women and 27 men aged between 22 and 74 work for the organisation.

He said the physically disabled, intellectually challenged and hearing impaired work in the bookbinding, basketry and hard cane units.

“Our mission is to train them to be independent by giving them jobs, ’’ he elaborated.

However, Jaro is facing financial constraints due to the Covid-19 pandemic, with donations having dropped by 80% since the movement control order last year.

Joseph said the organisation needed about RM800,000 yearly for operating expenses and relied on public donations as well as sales of handicrafts made by the employees.

Jaro was set up in 1952 for tuberculosis patients but later became a centre for the disabled. 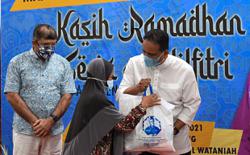 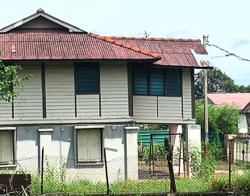