Koh (right) says the number of customers at his salon gradually dropped during the MCO last year.

DESPITE operating at a loss for almost a year due to Covid-19, hair salons in Johor Baru remain steadfast in delivering services.

Many are hopeful that business will eventually return to normal, especially once the border with Singapore reopens.

Hair salon owner Eric Koh, 50, said he used to get around 20 customers a day before the movement control order came into force last year.

“On weekends, the number could go up to between 40 and 50 customers a day, with more than 90% of them being Singaporeans.

“But when we reopened in June last year, the number dropped to some 20 customers a week in the first two to three weeks.

“The number further dropped to less than 10 customers a week in the following weeks, ” he noted.

Koh said the number of customers remained low after the salon was allowed to reopen following the relaxation of the second MCO, which began in January this year.

Another salon owner Sally Yeoh, 36, said business had dropped by at least 70% since the first MCO.

“Business has been tough for all sectors over the past one year, including hair salons.

“More than half of my customers are Singaporeans, including the regulars who drop by at least once every two months.

“At the moment, we are depending only on local customers to sustain our business and we try to offer special deals to attract more customers, ” she explained.

Hairdresser Abdul Hakim Azmi, 26, said there would usually be a slight increase in customers after hair salons and barbers were closed for a few months.

“Immediately after the relaxation of the MCO, we saw a slight increase for a few days.

“But this number would eventually return to five or less per day.

“There are also days when we do not have a single customer, ” he added.

Abdul Hakim, who is also a part-time makeup artist, said the hair salon where he worked used to see at least 15 customers a day. 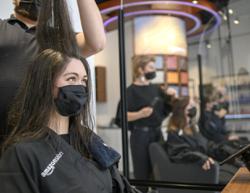