Volunteers sitting on low stools while working on the art project.

THE neighbourhood of Taman Riang in Butterworth, Penang,will soon be awash with the bright colour of sunflowers.

A floor art project undertaken by the Penang Youth Development Corporation (PYDC) will see the striking flowers painted on a 2m by 51m pavement.

The project sponsored by Bagan Jermal assemblyman Soon Lip Chee is the first under the Blank Canvas: Mural Art Series.

“Some 50 volunteers have been spending several hours during the weekend doing the inaugural floor art under the Blank Canvas: Mural Art Series.

“We have been at this for the past three weeks and we’ll finish it by this week just in time for the fasting month of Ramadan.

“Presently, we only have two more sunflowers to paint. After painting them, we’ll leave it to dry and a special coat will then be applied to the piece so it would not fade, ” she said when contacted.

Upon completion, the sunflower design by Hunny Ooi and Dylan Teoh will create a cheerful and peaceful sight while beautifying the Taman Riang neighbourhood at the same time.

The volunteers have been following strict standard operating procedures (SOPs) during the painting process.

Last Saturday morning, more than 15 people including Soon were present to take part in the project under the “Youth for Future” initiative.

The initiative, launched by the Penang youth and sports executive committee, is under the field of self-development in PYDC.

The project aims to provide more space for young people to connect with the local community and help market their work.

It is also in line with Penang2030 Vision in empowering youths to make a positive impact in Penang society through art and innovation. 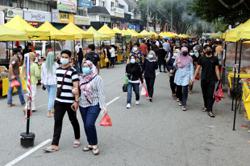 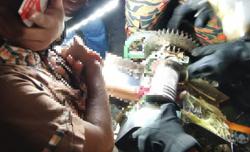