Ong (squatting, right) and Tai (on his right) looking at water leaking out of a manhole in front of shops in Pusat Bandar Baru Bercham. — RONNIE CHIN/The Star

FOR years, shopowners at Pusat Bandar Baru Bercham, Ipoh, have started their day washing away smelly sewage seeping out from a manhole in front of their shops.

Seafood restaurant owner Alex Tai Weng Thye said he would wash the road in front of his shop at least three to four times a day.

“The smell is there throughout the day, especially when there is no rain to wash it away.

“It has affected our business as diners have to suffer the stench and we need to pay extra sometimes to get cleaners to clean the road, ” he said, hoping that the problem would be resolved once and for all.

Tai said the situation worsened about two to three weeks ago.

“Not only do we have to deal with the smell, the sewerage system had also given way.

“The toilets in most of the shops here are clogged and can’t be used, ” he said.

“Some shopowners have hired contractors to break the pipes and waste would flow out into the drains. It is unpleasant, ” he said, adding that no one has taken responsibility for the matter.

“We are not sure who we should channel our complaints to.

“I have lodged reports with the police and Ipoh City Council, but nothing has been done, ” he said.

“Should we wait until the wastewater comes flooding into our dining area?” he asked.

One of Tai’s regular customers, who wished to be known as Lim, hoped the matter would be resolved immediately.

“I used to dine-in regularly but

I prefer to do takeaway or delivery now due to the foul smell and dirty drains.

“The shops and restaurants are clean, but it is sad to see the businesses here suffering, ” he added.

Bercham assemblyman Ong Boon Piow said he would meet with the mayor to resolve the problem as soon as possible.

“This has been going on for the past 20 years. I have contacted Indah Water Konsortium (IWK), the city council and the developer.

“They are pointing fingers at each other and not solving anything.

“Not only are the traders affected but also nearby residents, ” he said.

City councillor Albert Ho Wai Mun, who is in charge of the Bercham zone, said the council was aware of the situation.

“Tai has spoken to me before and I have forwarded the issue to our Engineering Department.

“I emphatise with the shopkeepers.

The problem could be due to the lack of septic tanks in the area. The city council will inspect the area, ” he added. 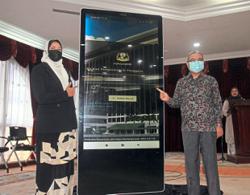