Hasni will put in a proposal to Federal Government to get the project listed under the LSS.

JOHOR is hopeful of getting Federal Government approval for the proposed RM1.4bil solar power park in Pengerang.

Mentri Besar Datuk Hasni Mohammad said the state would seek to be included in the large-scale solar (LSS) procurement programme, although the quota for this year had been filled.

“There is a lot of potential for Johor, not only to develop solar energy but also tremendous opportunity to sell the energy, including to neighbouring countries, which will provide a new income stream for the state government as well, ” he said.

Hasni said the state government would prove to the Energy Commission the potential a solar power plant would bring to the table.

“Maybe not at the full capacity that we proposed earlier, but as a start, it could be around 100MW to 150MW and we hope the proposal will be tabled to the Cabinet for consideration, ” he said during a get-together with Johor Media Club members.

He was commenting on the proposed solar power park in Pengerang that was announced by Johor Ruler Sultan Ibrahim Ibni Almarhum Sultan Iskandar last month.

On Feb 28, His Majesty announced that Johor was set to become a major producer of eco-friendly energy in South-East Asia with the opening of a solar power park in Pengerang.

Set to be named Sultan Ibrahim Solar Park, it would become the biggest of its kind in the region with a capacity of 450MW.

Sultan Ibrahim said the solar park was the first large-scale private investment project secured by the state for 2021.

However, on March 9, His Majesty called off the ground-breaking ceremony that was supposed to be held on March 23, following the Federal Government’s silence on the proposal.

Hasni said that by providing solar as a source of renewable energy, Johor, which pre-Covid-19 was the third largest state in the country in terms of attracting local and foreign investments, could draw more investors in the future.

“Currently, we have two big data centres. They are TM One Data Centre in Medini at Iskandar Puteri and Kulai Iskandar Data Exchange (Kidex) in Senai, which is currently at Tier Three.

“With these data centres potentially powered by solar energy, they could then be upgraded to Tier Four, thus attracting more companies to set up their data centres here in Johor, ” he said. 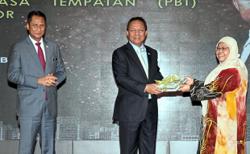