A ravine near a Sunway Damansara condominium has become an illegal rubbish dumpsite.

RESIDENTS of a condominium in Sunway Damansara, Petaling Jaya have had to put up with a bad stench from rotting animal carcass in a ravine behind their homes for more than a month.

She reported the matter to Petaling Jaya City Council (MBPJ) the next day.

On Feb 15, MBPJ’s cleaning contractors came to remove some of the rubbish, but due to the depth of the ravine (about 10m) and the weight of some of the waste, the carcass and rubbish were left there.

“MBPJ said they needed special equipment to remove it, but the rubbish is still down there and the stench is overpowering, ” she said.

Ong said over time, people had dumped piles of rubbish into the ravine.

She said MBPJ had told her that the land came under the purview of Federal Lands Commissioner (PTP).

Ong said she contacted Petaling district officer Datuk Johary Anuar who told her that enforcement on matters pertaining to misuse or trespassing of PTP land came under the Director-General of the Lands and Mines Department (JKPTG) Selangor.

JKPTG Selangor head Syamsul Nizam Shamsuddin said his team went to investigate and made reports, including a police report, to submit to the relevant parties so they could conduct a joint surveillance to ensure no further indiscriminate rubbish dumping happens at the site.

“I will also suggest to the Education Ministry to safeguard the plot by putting up fencing to prevent future intrusions.”

SJK(C) Damansara is located opposite the ravine, across a road.

Syamsul Nizam said the land, which was choked with rubbish, came under both the land office and JKPTG Selangor’s jurisdictions.

On March 8, the same residents reported open burning of another big animal carcass about 50m from the ravine.

When contacted, an MBPJ spokesperson said the matter was being investigated. 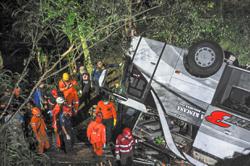