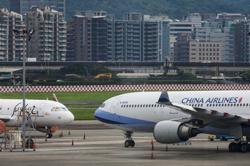 Penang Chinese Girls’ Private High School teachers commemorating the event with a cake-cutting ceremony at the school in Gottlieb Road.

Ewe managed to get the cake baked by her former classmate Sharon Chee Li Ting.

Students, alumnae from all over the world, teachers and staff gathered virtually on March 8 to celebrate the first anniversary of the school’s second century.

Principal Leow Ghin Ngee in her speech said whenever the school’s anniversary drew near, the alumnae would plan the celebration and also hand out gifts to the graduating students.

“In spite of the pandemic, the school continues to celebrate its anniversary, the only difference is that this year, we are celebrating it online.

“Other than the anniversary that day, it also happened to be International Women’s Day and a seminar themed ‘Change the World’ was held for the students to inspire them with science.

“I hope that our students will not give up on choosing to go down the path of science and not be scared of science or technology as it is thought to be male-dominated.

“The seminar by Ooi Shi Ting, who is pursuing her PhD in multimedia technology at Universiti Sains Malaysia while working in a multinational company, debunked the misconception and helped to persuade the students to study in the science stream, ” she said.

The cake was later cut by Leow and the senior teachers to also celebrate their roles in creating and nurturing talents.

At the same time, the newer teachers were given gifts prepared by the school administration.

Last year’s graduates Wong Qing Lynn and Janice Wong Jie Ni were the masters of ceremonies and their eloquent presentation made everyone feel welcomed during the virtual anniversary.

Leow added that the pandemic has “changed our lives but we are grateful that everyone still loves the school and continues to stand by our alma mater”.

During the celebration at the school in Gottlieb Road, a choral performance of the school’s anniversary song ‘Step by Step’ by 75 students and teachers was performed with the accompaniment of traditional Chinese and Western musical instruments.

There was also a sign language performance titled ‘A Seed’ by students who see themselves as a seed becoming a forest for Chinese education in the future.