Waiting for visitors to trickle in

THE world’s longest water slide at the Escape Theme Park in Teluk Bahang, Penang, is now open to the public despite the limited fanfare.

Escape theme park chief executive officer Sim Choo Kheng said after the cleaning and disinfecting of all the facilities, the park was reopened last Saturday.

“Once the Government announced the easing of the restriction, our staff cleaned, tweaked and double-checked all equipment to make sure the items are in good condition.

“When the park was closed, we still ran the equipment randomly throughout the day and continued to maintain the place.

“There was not only loss of income but running costs too, as we have to treat and circulate the water at the water park, ” he said.

Sim said in the past 12 months, the park had only been open for around three months.

“We have had to retrain our staff, to refresh their memory as well as train them on the new standard operating procedures.

“They have undergone a rehash of their CPR training as well, ” he said.

Sim said he did not expect a large crowd as yet, as the interstate travel was still not allowed. 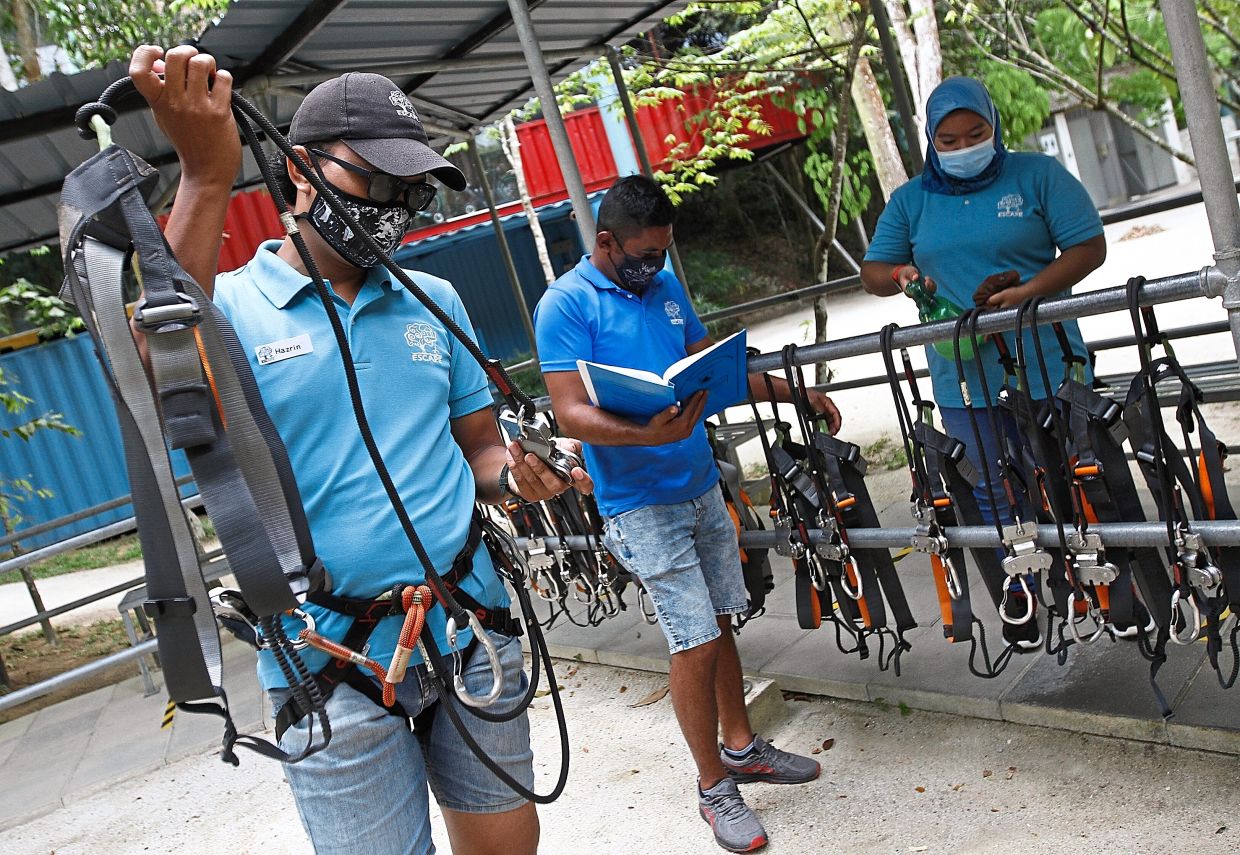 Park workers disinfecting and checking the safety harness at the Escape Adventureplay.

“Business has been slow, as we are only catering to domestic tourists.

“These are Penangites, as there is the interstate travel ban.

“It does defeat the purpose as our hands and legs are tied.

“We need to pay our staff and the park is fully functional, which means our electricity is running.

“We know will not be an overnight thing, I expect it to take a while before we see a crowd.

“People are still afraid of Covid-19 and are careful when coming out, ” he said.

The first Escape Theme Park, a fun outdoor destination with exciting rides and games hosted in a natural environment, opened in 2012 in Penang.

The park is home to the world’s longest water slide.

Spanning 1,111m and certified by Guinness World Records, the slide takes one down through 20 turns and five loops from the forested land located 70m from the ground, or the height of a 23-storey building, before ending at the park’s swimming pool some 600m away.

The slide is among 40 attractions in the park to reopen for rides.

On March 2, the government announced that Selangor, Johor, Penang and Kuala Lumpur will exit the movement control order (MCO) and enter the conditional MCO effective on March 5 till March 18. During this period, interstate travel remains prohibited while inter-district travel will be allowed in all states, except Sabah.