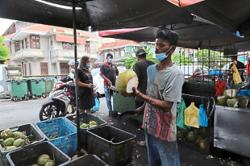 A customer in George Town cooling down with Chinese herbal tea which is popular during hot weather.

WITH more people working from home coupled with the scorching heat, many shops have reported a surge in sales of air-conditioner units this year.

Penang Air Conditioning and Cold Chamber Merchants Association chairman Tan Kean Leng said there had been a 10% to 20% increase in sales since the hot spell started early this year.

“The increased demand has led to a supply shortage of some models in the market.

“Models like those with anti-bacterial and better filtering functions are more popular despite costing 20% more than other models, ” he said.

Tan, however, said not all retailers were rejoicing as those servicing factories had been badly affected during the Covid-19 pandemic.

“With many factories cutting costs, technicians providing them service and maintenance have recorded about 30% drop in revenue.

“The postponement and cancellation of major projects amid the pandemic have further compounded the situation, ” he said.

Asked on getting the right air-conditioner for energy efficiency and cooling, Tan said the general rule was that models with capacity of 1HP and 1.5HP would suffice for rooms and living halls respectively.

“This should be comfortable enough for home owners.

“However, old and worn-out air-conditioners need to be serviced and cleaned regularly to ensure proper working order, ” he said.

According to the Malaysian Meteorological Department (MetMalaysia) website, various states in the country have recorded an average daily temperature of between 28°C and 32°C.

Higher temperatures are recorded in the northern states, with some recording up to 36°C at the peak of the day.

MetMalaysia director-general Jailan Simon in a statement said the country was now seeing the end phase of the northeast monsoon which would last until the middle of this month.

“During this period, the amount of rainfall will be low throughout peninsula Malaysia, especially its northern states.

“The hot spell this year is not extraordinary.

“It is a natural phenomenon throughout February to April every year. 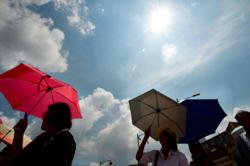