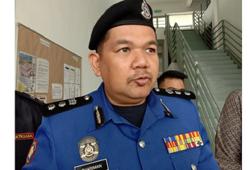 Shariman (right) showing the pile of nitrile gloves that were confiscated from the illegal factory in Bandar Baru Bangi, Selangor.

RUBBER gloves were strewn on the floor and some were on sorting tables.

Beside the gloves, there were washing machines and cleaning solutions like bleach, tyre polish and liquid blue.

Many of the gloves that looked washed still had unidentified stains and scribbling on them, and were being handled under unhygienic conditions.

There was also no clear indication of segregation between the ones that had been washed and those piled up for washing.

Storage-wise, some gloves were packed in sacks on open-air racks at a parking area.

Those packed in boxes were devoid of protective covering, a clear indication that the products were not sterile.

This was the scene at a factory in Bandar Baru Bangi, Selangor, witnessed by members of a raiding team.

It was clear that an illegal activity of washing used gloves was taking place there.

The illegal factory has been sealed and the gloves have all been confiscated as evidence to catch the culprits.

The team led by Kajang Municipal Council (MPKj) also consisted of officers from the Domestic Trade And Consumer Affairs Ministry and the Medical Device Authority (MDA) that comes under the Health Ministry.

The authorities believe that the gloves were being rewashed and passed off as medical examination gloves to be sold to the public, and to clinics and other medical institutions.

Following a public tip-off through the MPKj hotline, authorities discovered the sacks of nitrile gloves generally used in medical facilities.

MPKj Enforcement Department director Shariman Mohd Nor said workers involved in the rewashing and repacking process were foreigners who managed to run away during the raid.

“We fear these gloves are being bought by private clinics. We do not know the origin of these gloves, ” he said, adding that it could infect patients with dangerous viruses and bacteria.

“This is especially so when used in dental clinics during examinations when the medical practitioner is required to put their hand into patients’ mouth, ” he said.

Shariman added that the illegal factory was believed to have been operating for the past three months without a business licence.

The rewashed gloves also have been repacked into boxes and labelled as medical examination grade gloves.

It was learnt that they were being sold to walk-in and online customers.

After processing, the gloves are packed in either clear plastic bags or boxes and sold at between RM18.90 and RM22.90 per pack.

A total of 86,981 pieces of the so-called medical examination gloves found packed in boxes were confiscated during the raid.

MDA enforcement unit senior assistant director Dery Akmal Abdul Rahman said they were trying to verify the make and intended use for the gloves in loose packs as items like disposable gloves did not come under MDA jurisdiction.

The total worth of confiscated goods was estimated at RM40,000.

Dery said initial investigations pointed to the gloves as coming from manufacturers who have categorised them as second grade.

“They are not rejects, but have not met the quality standards of the manufacturer, ” he said.

Organisations responsible for the manufacture, distribution and sale of the products must also ensure that action be taken to eliminate the detected non-conformity and to prevent further usage or application of the product.

The main worry for the public is medical gloves that have not been sterilised or have been handled under unsanitary conditions, would leave patients at risk of being infected by the very products that were designed to keep them safe.

“It is not impossible for diseases like syphilis, Covid-19 or even HIV to be transmitted through exposure from contaminated gloves, ” said Dery.

However, as investigation on the source of the gloves was ongoing, he declined to comment on the possibility that the gloves could have come from hospitals or clinics.

“We are still tracing the sources and the factory’s clients based on the invoices and delivery orders, ” he said.

“So far, we found two operations like the one being carried out at the illegal factory in Bangi through public tip-off, ” said Dery.

Whether similar operations were being carried out on medical devices like syringes, sharps, face masks and other one-time-use items, Dery said it would be further investigated.

Meanwhile, for the sake of public health and safety, Dery said consumers should only buy medical devices from companies registered with MDA.

Verification can be made via https://mdar.mda.gov.my 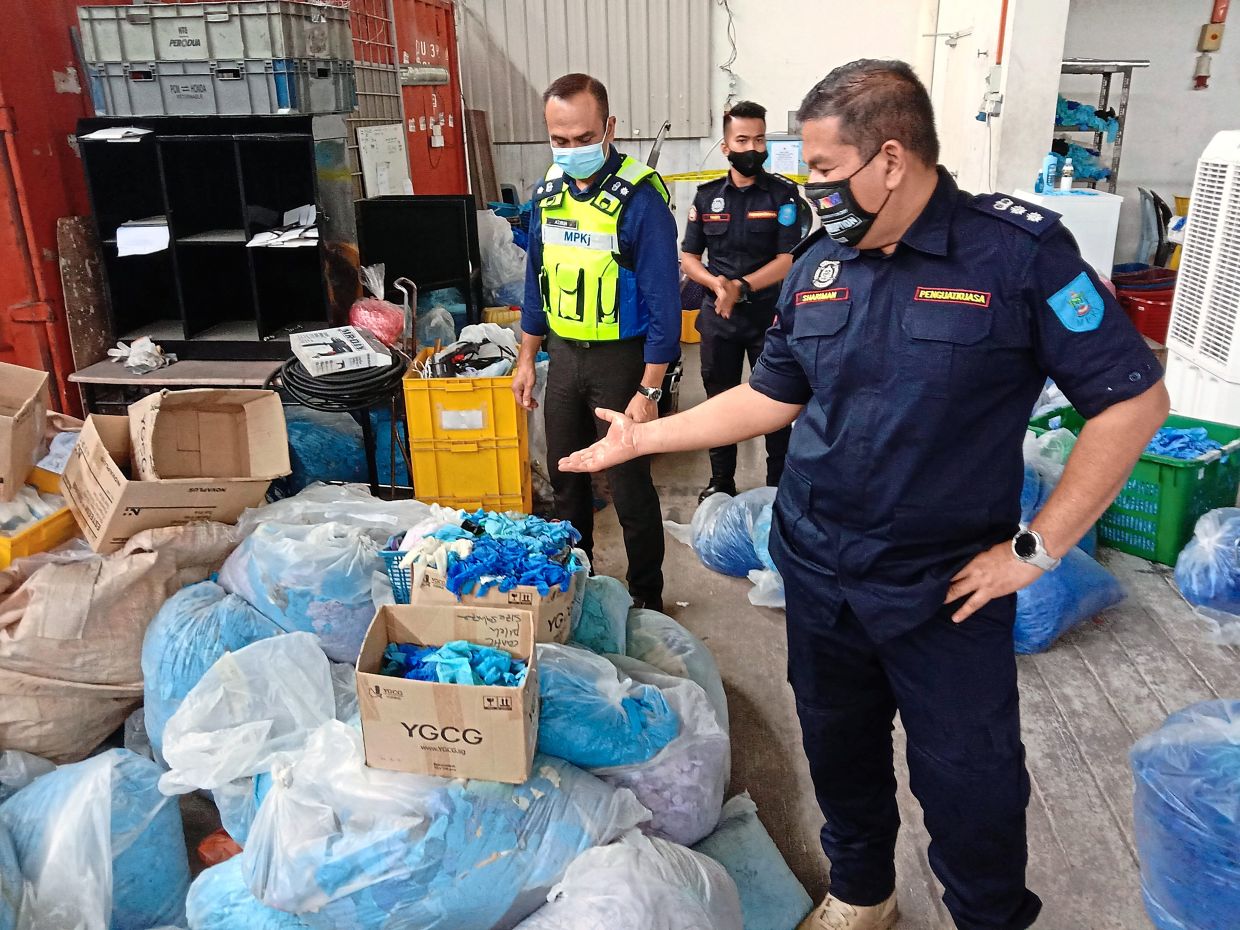 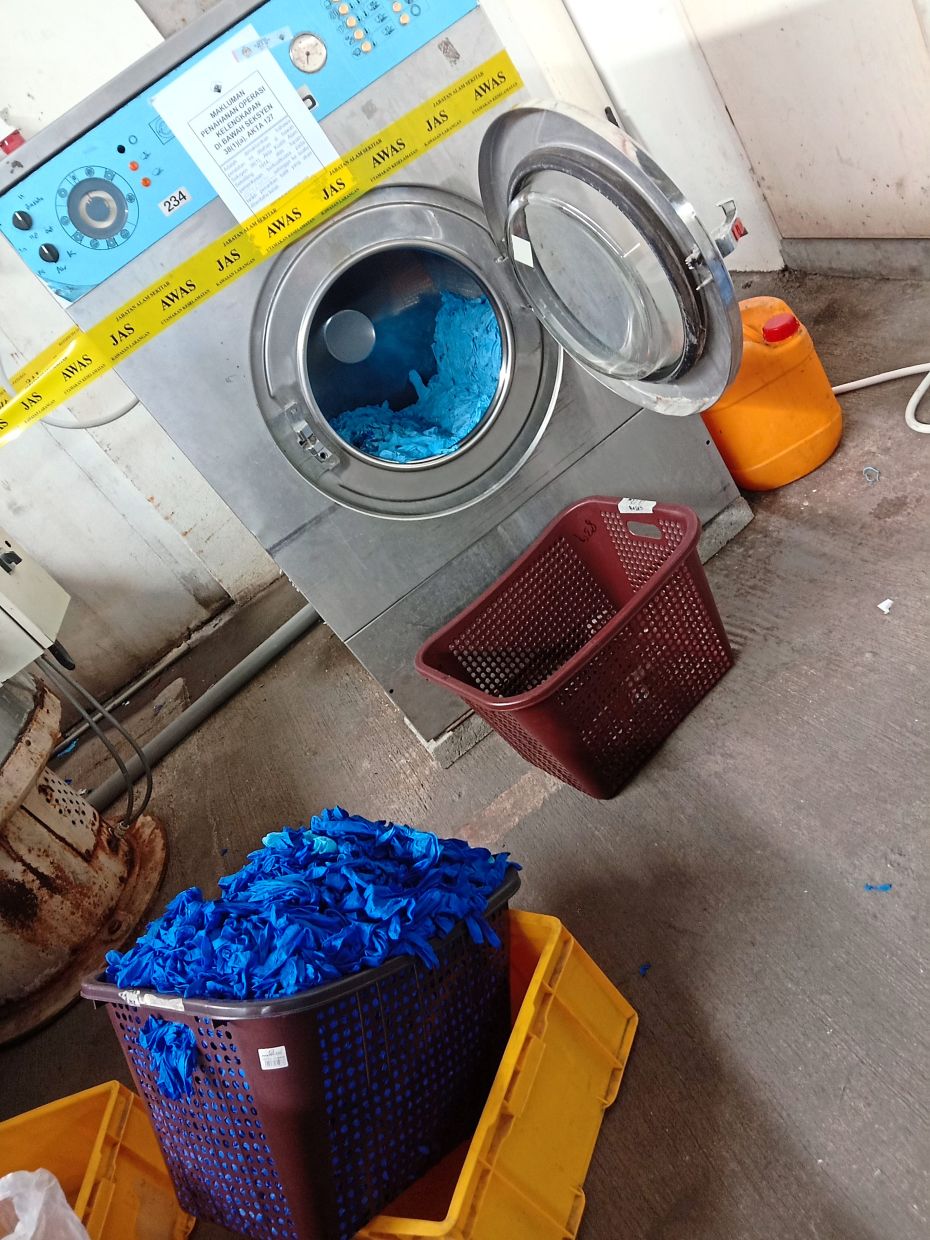 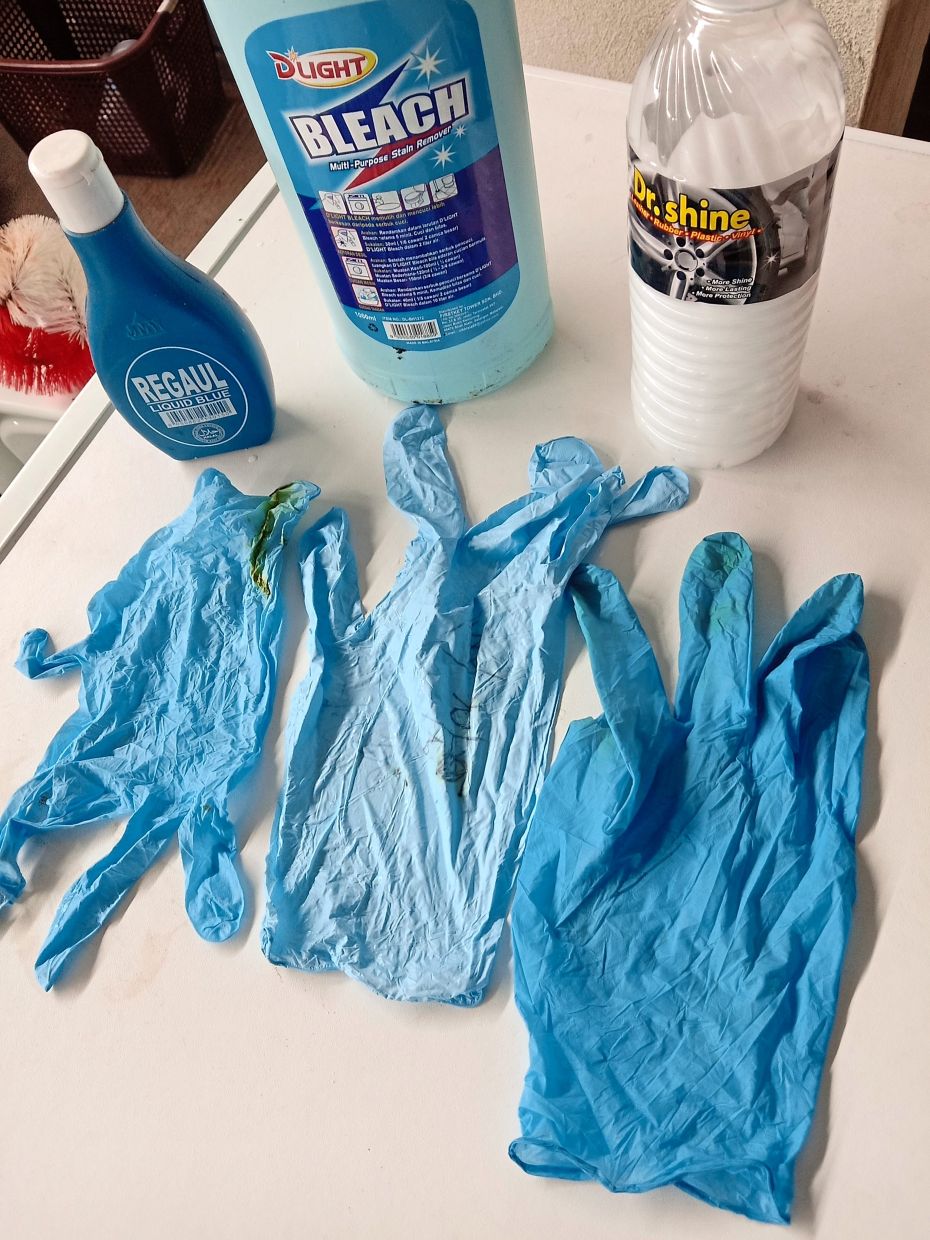 Shariman (right) showing the pile of nitrile gloves that were confiscated from the illegal factory in Bandar Baru Bangi, Selangor.

Unidentified stains and scribbling on the seized nitrile gloves can be seen here. 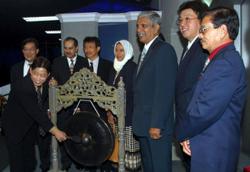