It took a team of 10 using six laptop computers, a voice synthesiser and amplifier, spotlights and two LED screens to entertain an audience of over 100 participants for two hours.

He said the two LED displays were used for everyone to see participants’ screens and to monitor the Facebook comments during the lucky draw session.

Ryan admitted it was a challenge for the team to work with multiple software on one screen.

But the most challenging part, he said, was working during the Chinese New Year holiday.

Nevertheless, Ryan said it was rewarding for everyone because they managed to draw Malaysians living in Taiwan, the United States, China and Hong Kong.

He said the team was glad their Internet connection was speedy and they had no problems at all.

“Basically, what we did was celebrate with those who were unable to ‘balik kampung’ due to the Covid-19 pandemic.

“We could at least cure their longing for their hometowns and make them feel less lonely, ” he said.

The virtual party was held on Valentine’s Day, which was the third day of Chinese New Year, with several singing performances and over RM3,000 worth of lucky draw prizes given out.

In his online speech, Soon congratulated the team on their hard work in organising the live event.

“Due to the outbreak of Covid-19 and the implementation of the movement control order, Chinese New Year this year is so different from previous years, especially for those who cannot be with their families.

“Although we are physically separated, the Internet allows us to reconnect with each other, ” he said.

He added that the online festival helped PYDC make the celebration accessible to anyone in the world while re-inventing the festive experience and creating a never-seen-before virtual experience. The team working smoothly to ensure the success of the virtual party.

A Zoom session with participants. 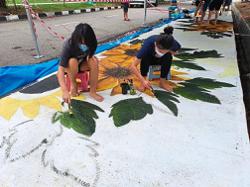