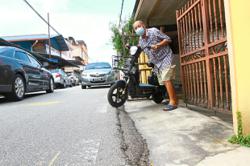 Wong showing the raised edge of the road that is higher than his house porch. — CHAN TAK KONG/The Star

Residents of Kampung Chempaka do not want a road in their neighbourhood to be resurfaced it will become even higher than the front of their houses.

Wong Kwan Yuen, 78, who has been living in the village for 40 years, said if the authorities must resurface Jalan PJU 1/4, the road should be milled.

That, he explained, involved scraping away the old layer of tar before adding the new layer.

He complained that currently water flowed into his house porch whenever it rained.

He also finds it difficult to get his motorcycle and car in and out of the porch.

“When I reverse my car onto the road, I can hear the bottom of my car scraping against the road edge because the road is about 15cm higher than the front of my house.

“This main road is still in good condition. It was last resurfaced in 2018, ” added Wong.

She said notices were left on some of the residents’ car windscreens, which stated that the road resurfacing works would be carried out by Housing and Local Government Ministry (KPKT) on Feb 26 and 27.

However, the work has been shelved following Petaling Jaya City Council’s (MBPJ) feedback to the ministry. MBPJ area councillor Leong Chee Cheng said the council was not told about the road resurfacing works.

“It will be better if KPKT consulted MBPJ because the council will be able to suggest roads that require resurfacing.”

He said MBPJ planned to repair the road depressions in Jalan PJU 1/4 and stressed that merely resurfacing the road would not solve the problem.

He further said that putting more tar on the road might exacerbate the problem.

“It will be a waste of money if the road is resurfaced before it is properly repaired.”

Leong added that MBPJ had informed KPKT that the council was discussing the matter.

Bandar Utama assemblyman Jamaliah Jamaluddin said there were other roads in Kampung Chempaka that were far more critical and due for resurfacing, compared to Jalan PJU 1/4.

“Residents are unhappy and we hope the village chief will be contacted so that her views will be heard too, ” she said. 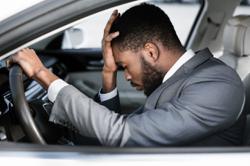