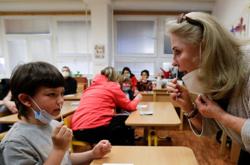 A teacher sanitising the hands of twins Zulaikha (right) and Zahirah. With them is mother Nor Hafizah.

Excited Year One and Two pupils showed up early at SK Sungai Nibong in Penang on their first day at school after two months of online classes.

Among them was Year One pupil Raja Ammar Harith Raja Ahmad, entering his primary school premises for the first time.

“This morning, he woke up early to pack his bags and prepare his school attire.

“Staying at home and being unable to see his friends really stressed him out.

“He likes to mix around so the online classes have not been able to keep his attention, ” she said when met at the school gate yesterday.

Year One pupils, twins Wan Nur Zulaikha and Nur Wan Zahirah, were also all smiles as they entered the school gates.

Their mother, housewife Nor Hafizah Mohd Daud, 39, said her twins were excited about going to school though Zulaikha was nervous as well.

“The younger one, Zahirah, is an active person who likes socialising and is excited to find new friends in school.”

Year Two pupil Nur Irish Tasnim Saaroni waved happily to her teachers as she walked in.

Her mother, housewife Nur Syuhada Abdul Latiff, 39, said the school reopening delighted her daughter as she had been staying home for too long.

“Online classes bore her. I hope she finds joy at school.”