The idyllic scene at Acheh Street.

PENANGITES living on the island are now savouring a little bit of what the city has to offer without all the usual hustle and bustle.

A check around the heritage enclave of George Town showed a handful of people walking around while shops seemed empty and quiet, a far cry from the hustle of normal weekends.

Teenager Amirul Syazwan Shamsul, who is from Sungai Ara in Bayan Lepas, was spotted with some of his friends visiting the heritage enclave.

“We have not hung out in months.

“It has been four to five months since a group of us went somewhere together.

“We grew up together and have known each other since primary school. Amirul taking a picture of the ‘Little Children on a Bicycle’ mural along Armenian Street. —Photos: LIM BENG TATT/The Star

“Before the movement control order (MCO) was implemented, we would see each other more than 10 times a month.

“We have never walked around the heritage enclave before as it is usually crowded.

“However, this time around, we decided to drive by and see if we can take some pictures, ” said the 19-year-old.

Amirul said he understood the need for social distancing so the friends were careful and always wore their masks.

“It is nice to be here and take some pictures together.

“We will head somewhere for lunch later, ” he said.

Vince Ong, who runs a popular cafe at the enclave, said business had yet to pick up to pre-MCO levels.

“I am really not sure what to expect next as it would depend on the government.

“We notice that there are families coming out to dine as they have been cooped up at home for so long.

“We do have most of our regulars coming back but a lot of them are trapped because of the inter-district ban.

“We are currently operating around 50% to 60% of our capacity.

“We will gauge and see if we should go full force if the business picks up, ” he said. 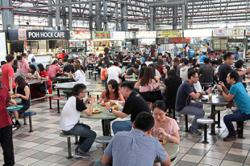