Market-goers are hoping for a better shopping experience at the Pasir Pinji wet market in Ipoh. — Filepic

MANY things have changed during the course of the Covid-19 pandemic, including our way of life as people are forced to adapt to the new norm.

There is, however, one thing that remains unchanged — Pasir Pinji wet market traders’ refusal to have a new place.

This was even after a fire broke out due to a short circuit last month where 20 stalls selling meat and fish were damaged.

The 62-year-old market is dilapidated, dimly lit and has a leaky roof. Yet, the traders seem content with its current state.

And like many old wet markets in Ipoh, the premises is dirty and foul-smelling.

Many traders there feel that only minor renovations are needed, in spite of the market-goers’ wish to shop in more conducive surroundings.

There was talk of demolishing and rebuilding the market in 2019 but the plan seemed to have been shelved, possibly due to budget constraints.

Even then, the traders have stated that they do not need a new place.

Among the reasons for their lack of enthusiasm are worries that they may not get a location similar to their current stalls, thereby affecting business.

Another excuse is that a new market will inevitably become dirty sooner or later and thus, any plan to rebuild will be a waste of money.

At the moment, it really seems like nothing will convince them to agree to a new market.

On its part, the state government is wary of building new premises first with the hope that traders will move in later.

Pinji zone, said wet market traders should change their mindset and not be sentimental about the current facility.

“I do understand their worries but it will be better for them and their customers in the long run.

“These traders need to be given assurances that their business will improve with modern facilities, ” he said.

“For me, Pasir Pinji New Village must take a step forward and become developed.

“The government should ensure that the design for a new market takes into consideration traders’ input, ” he added.

Ng said that to prevent dissatisfaction over the allocation of stalls and location, the government could give a black-and-white undertaking whereby existing traders would be given a right of first refusal.

“It won’t be easy but not impossible if the government is sincere in wanting to help the traders, ” he said.

A new market, complete with modern facilities and proper drainage, is a no-brainer and should really be considered by the traders in Pasir Pinji.

So far, only two markets in Bercham and Tanjung Rambutan had been rebuilt – in 2007 and 2013 respectively.

Though not entirely without problems, the premises there are clean and equipped with modern facilities.

Frankly, the Pasir Pinji market is not the only one that needs to be rebuilt, as the Menglembu and Gunung Rapat markets too are in bad shape.

Market traders should not be stuck in the past, but rather look forward to the future. 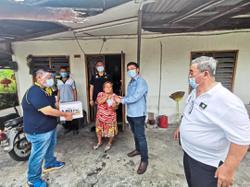