CLOGGED drains resulting from untrimmed trees and rubbish being thrown into the irrigation system of Taman Megah Ria are attracting rats and crows.

One of the residents, Salahuddin Abdullah, 55, who has lived in Taman Megah Ria since 1995, said this was a huge problem in the neighbourhood.

“The crows and rats are a nuisance. They are a health hazard, especially now, with the Covid-19 pandemic.

“The clogged drains have also become a breeding ground for mosquitoes, which could lead to dengue, ” he added.

Salahuddin said he had been lodging complaints to Johor Baru City Council (MBJB) since 2009 but the council had yet to take action.

“The crows have made nests on big trees and I have to wash my car daily because of their droppings, ” he added.

Another resident who only wanted to be known as Chan, 70, urged the city council to take immediate action.

“The drain at the back alleys is full of rubbish and has become a breeding ground for rats and cockroaches.

“The situation is worse now as there are traders from the morning market and food court who throw waste into the drain, ” he said.

Retiree Rauf Hamid, 55, added that the clogged drains could lead to flash floods as there was an industrial area nearby.

He said whenever it rained heavily, water from the clogged drains would overflow.

He explained that under the Solid Waste and Public Cleansing Management Act 2007 (Act 672), SWCorp had taken over responsibility for such matters from all local authorities.

“In light of the complaint, MBJB has contacted SWCorp and its concession company to resolve the issue of clogged drains in the area.

“SWCorp has taken action to resolve the matter, ” he said.

As for the problem with crows, MBJB has employed several methods of crow control, including destroying the nests and shooting the birds.

Adib Azhari said the first method was conducted in areas targeted by MBJB while the second method required special permission from the police.

“The shooting of crows was carried out on Oct 28 last year and on Jan 7, with a total of 230 crows killed.

“As for the rat problem, MBJB carried out six pest control operations in the area last year where poison was used to kill 122 rats, ” he added. 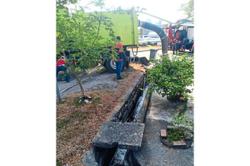